In 2014, companies said they would spend almost $4 billon building or expanding operations across Upstate South Carolina. As companies continue to thrive in the Upstate, they also create an ever-growing skilled workforce, creating over 4,500 new jobs in the Upstate in 2014.

A vast majority of that workforce originates from the region’s impressive employment pipeline which includes 23 colleges and universities in the region as well as our long-established technical college system and nationally recognized state workforce training programs readySC and Apprenticeship Carolina. While businesses have no shortage of skilled workers right here in the Upstate, they also have the benefit of attracting talent from outside of the state, leveraging the region’s great quality of life to draw employees to the state of South Carolina.


The many benefits of living in South Carolina were a major reason our state ranked No. 2 on the list of top moving destinations in the United States in United Van Lines’ 38th Annual National Mover Study, which tracks customers’ migration patterns state-to-state during the course of the past year.  Last year’s study found that 61 percent of the moves to and from South Carolina were inbound, just behind Oregon’s 66 percent and just ahead of North Carolina, which ranked third. United Van Lines top 10 lists for inbound and outbound moves included:

The top outbound states for 2014 were: 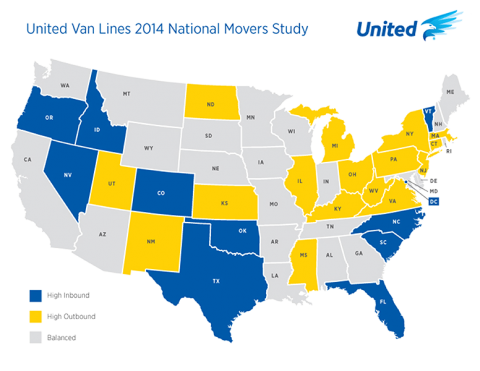