Drinking and wastewater are some of life’s most basic necessities, though we don’t think about them often. You turn on your faucet, and water is there. You flush a toilet, and the water disappears. Have you ever wondered where it goes or what happens next?

“These are questions you don’t have to worry about because we do,” says Sue Schneider, CEO of Spartanburg Water. As part of our #TeamUpstate storytelling, we heard from Schneider about how the utility company’s mission ⁠— to provide quality drinking and wastewater services to our region in a reliable manner ⁠— helps drive economic development.

On the role Spartanburg Water plays in the community

“Spartanburg Water serves a population of nearly 200,000 within Spartanburg County, as well as others in parts of Greenville, Union and Cherokee counties. With the help of its dedicated team of nearly 300 employees, each day it produces an average of 25 million gallons of drinking water and cleans 14 million gallons of reclaimed water for its customers and community.”

On the unsung hero of growth and development: sewer

“Wastewater treatment facilities symbolize a community’s commitment to public health, to the environment, and to its economy. The creation of the Spartanburg Metropolitan District by the South Carolina legislature 90 years ago was a bold move. The prevailing method of managing wastewater at that time was to collect it and to discharge it into creeks and streams.”

On the history and advancements in the sewer industry

“The Spartanburg Metropolitan District was established in 1929 – the same year as the start of the biggest economic downturn in history: the Great Depression. At a time when banks, factories, and businesses were forced to shut their doors, Spartanburg leaders made the wise decision to invest in sewer infrastructure.

Surrounding mill villages had wastewater collection lines, and to protect human health and the environment, leaders wanted a more forward-thinking option than to discharge untreated wastewater into nearby streams and rivers. The Spartanburg Metropolitan District began building for the future, launching operations at two wastewater plants, Fairforest and Lawson’s Fork, in 1931. 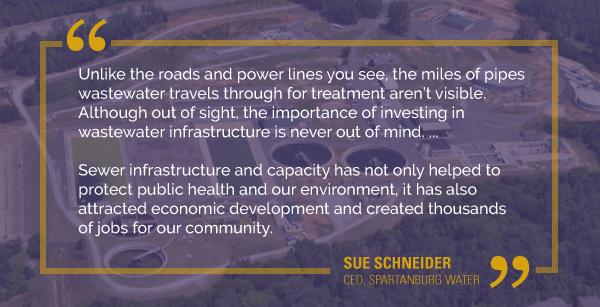 In the decades that followed the Great Depression and then World War II, Spartanburg County experienced a building boom as the economy expanded. The governance framework in place at the time resulted in haphazard growth throughout the county, including private sewer systems that were sometimes inadequate, as well as other areas where no sewer systems were in place. Collection systems were divided into sub districts and run separately from the administration of the Spartanburg Metropolitan District. The Spartanburg Metropolitan District lacked authority to construct collection lines to serve new development or to establish standards for the construction and upkeep of systems.

To keep up with growth in the county and ensure that sewer collection lines were planned and installed, legislation was passed in 1970, changing the name of the Spartanburg Metropolitan District to the Spartanburg Sanitary Sewer District (SSSD). It expanded the boundaries of the District and gave it authority to construct sewer collection mains to serve users directly. The legislation also allowed the District to annex areas by petition or by public necessity to serve areas beyond its initial established boundaries.

A board of commissioners was created to oversee the Spartanburg Sanitary Sewer District. This change resulted in aggressive capital improvements during the 70s and 80s. The wastewater plants expanded their capacities, and new interceptor lines were installed in the county. SSSD also expanded by acquiring the small lagoons and package plants put in by development. Small, local collection systems that still dumped raw sewage into the Pacolet Rivers were brought into the Sewer District and the wastewater transported for treatment.

The sewer district grew by both acquisition and consolidation of smaller systems that could not keep up with the more demanding regulations and expectations of their communities. This growth and capital investment was progressive in bringing fragmented wastewater facilities, scattered around the county, under the management and operation of the Spartanburg Sanitary Sewer District.”

On the Sewer District’s economic impact in Spartanburg

“In 1995, the Spartanburg Area Chamber of Commerce cited the lack of planned wastewater infrastructure as the number-one impediment in attracting and recruiting quality and high-paying jobs to the community. SSSD solved public health and environmental challenges for the county by acquiring dozens of small, outdated and poorly performing wastewater package plants in the two decades following the governance changes.

The next big challenge was to regionalize sewer facilities and extend collection lines that would attract the next wave of economic development for Spartanburg County. The Spartanburg Sanitary Sewer District took on that challenge for the county and delivered state-of-the-art wastewater treatment facilities and expanded capacity that has drawn many industries and created high-paying jobs for the community. 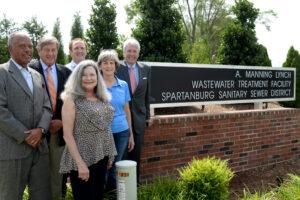 One piece of the economic puzzle

“Unlike the roads and power lines you see, the miles of pipes wastewater travels through for treatment aren’t visible. Although out of sight, the importance of investing in wastewater infrastructure is never out of mind. The Spartanburg Sanitary Sewer District has installed and acquired hundreds of miles of sewer line, promoting and contributing to residential, commercial, and industrial growth in Spartanburg County.

Sewer infrastructure and capacity has not only helped to protect public health and our environment, it has also attracted economic development and created thousands of jobs for our community. Spartanburg Sanitary Sewer District has worked for 90 years to replace an antiquated sewer system with modern facilities capable of meeting the needs of a new brand of economic development taking off here.

From 2017 to 2018, the Greenville-Spartanburg region saw $2.1 billion in investment and the addition of 7,300 residents in Spartanburg County. Without state-of-the-art wastewater treatment plants and the opportunities they provide, those numbers would not be possible.”