What Does Brexit Mean for the Upstate?

Nearly three years since the United Kingdom’s vote to withdraw from the European Union, few details about Brexit are set in stone. As teams of advisors negotiate terms for the transition ahead, businesses worldwide are asking the same question: “How will this affect us?”

The Upstate SC Alliance, in partnership with the European American Chamber of Commerce of the Carolinas, hosted a panel discussion to delve into that topic, walking through the impact Brexit could have on Upstate companies of every size.

Attendees heard from British Embassy Brexit Counsellor Alexandra Hall-Hall, Dr. Jason Jones, associate professor of economics at Furman University, and Brianna Woodsby, director of international trade for AFL’s corporate headquarters in Duncan. Since Brexit has been a dynamic situation, it’s important to note that the remarks below were provided during an April 11 event; this piece is intended to offer large-picture commentary.

Describing the situation as something of a “Goldilocks situation,” British embassy Brexit Counsellor Alexandra Hall-Hall said the deal negotiated by United Kingdom Prime Minister Theresa May was regarded as “too soft” for some, and “too hard” for others. (Note: Since these remarks were offered, May has announced her resignation as leader of the Conservative Party, and she is continuing to serve as Prime Minister until her successor is determined.)

Having been unable to secure support for the deal in the House of Commons, parliament had mandated the British Prime Minister to seek an extension to the deadline for leaving the EU. At a meeting of the European Council in April, it was agreed to extend the official deadline to October 31.

After a lively discussion and questions from the audience, takeaways include:

1. Brexit has been a long time coming.

Hall-Hall explained that the UK had historically had a “slightly ambivalent attitude” toward the EU, first thought of as a common market to benefit the nation’s economy, meaning her country never had the “same attachment” to it as other members.

As in the United States, there is a debate in the United Kingdom about the right balance of power between different levels, and one of the drivers for Brexit was a concern over national sovereignty. Immigration concerns had also been a factor, especially in wake of the refugee crisis from Syria – though this had been over-interpreted as meaning the UK was actively hostile to any migrants, contrary to the UK’s record of historical openness to migration.

2. The decision reflects a growing concern about globalization.

Other concerns influencing voters to support leaving the EU during the referendum included concerns about where jobs were going, and their underlying fears of losing control of their lives and livelihood, Hall-Hall said. “Control of our nation’s borders, money, jobs – all of this played a role.”

Dr. Jones agreed, saying that the UK “has different goals from rest of the EU, and Brexit is one expression of an anti-globalization movement seen across world. Other nationalistic parties are rising and asking for similar autonomy.” Data indicates that technology and mechanization are driving this trend as well, he explained: bifurcation of wages has widened since the 1970s, leading workers employed in lower-skilled positions to believe “they’d be better off without trade.”

3. It was always going to be difficult to leave the EU.

According to Hall-Hall, a longstanding relationship like the one between the UK and the EU “was always going to be hard to alter in just a few years.” A legally-binding withdrawal agreement setting out the terms of departure had been agreed, alongside a Political Declaration setting out the parameters of the future relationship. She noted that though the UK was leaving the EU, it was not leaving Europe. The UK wanted to leave the EU in an orderly fashion, and aspired to retain a close relationship with the EU after that. However, finding precisely the right balance in that future relationship has to this point “been elusive.”

After withdrawal terms are finalized, and the UK has formally left the EU, the UK will have an independent trade policy for the first time in decades. “Our government will then be keen to negotiate as ambitious a trade agreement with the United States as possible.” But the precise scope for this will depend on the extent to which we decide to remain aligned with the EU in certain sectors. She noted that there is an “appetite for a mutually beneficial trade agreement” with the U.S., setting the stage for a successful continued relationship separate from the EU.

Dr. Jones, who referred to Brexit as “a messy divorce,” emphasized that the change will affect “the movement of goods and services, as well as people,” as citizens of the UK and the EU, as well as products of each, are treated differently for the first time in years.

5. Upstate companies are bracing for impact.

Woodsby, whose company has two locations in the UK and one in Germany, said her business has been studying Brexit proactively for years. “It’s a challenge to anticipate in 2017 what might transpire in 2020,” she noted, but AFL has “walked through all the options, reassessing our logistics and warehousing strategy, and nailing down the numbers of how many customers could be impacted.”

At the forefront of her team’s strategy has been the desire to minimize supply chain disruption for customers and maintain AFL’s value proposition as a competitively priced option for EU firms. “A lack of free trade within the EU” will require AFL to register a new entity on the continent to avoid value-added tax and marked increases in costs passed on to their customers.

“Even with the uncertainty, it’s been critical to quantify the impact this could have as we import/export and see tariffs and shipping numbers climb.” Woodsby added that her team’s projections are shaping new strategies to account for the altered trade landscape in Europe post-Brexit, but “nothing is agreed until everything is agreed” in terms of the withdrawal. “That’s the ultimate caveat, so while we can predict there will be a 2020 transition period, there’s no guarantee that will happen. Those of us involved in putting strategy together find this to be a logistics and tax-planning exercise.”

“Customer impact drives our strategy; it’s our top priority. We are already making changes on our side to assure they can continue doing business with us” regardless of their country of origin, she said. “We want to be able to trade within the EU with ease, for ourselves and our customer base.” 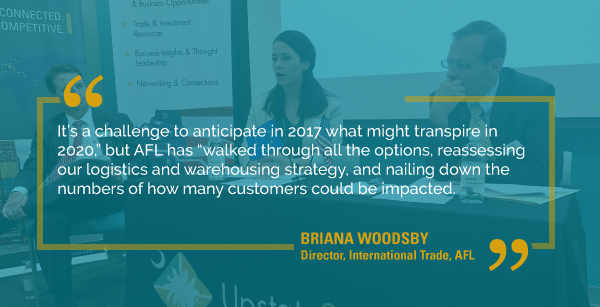 6. The United States is positioned well to weather whatever comes.

Jones pointed out that “Research estimates suggest that the UK will lose between 1% and 10% of its GDP depending on how soft the exit is,” meaning the UK might feel anything from a mild recession to a “2008-level” one. This certainly could have negative “spillover effects to our macro-economy,” Jones explained. “The effect on businesses will depend on how integrated companies are with the UK or EU.” Jones, however, believes the United States as a whole is positioned well to weather whatever Brexit brings.

The United States is “more immune than other countries from significant international fluctuations, because a larger portion of our economy is driven by consumers within the United States,” he noted. “I don’t see a UK recession having major economic consequences for the United States, perhaps just a slowdown” on par with recessionary effects of the “overhang from tax cuts in the first part of the year.”

In short, he said, “the large effect is not too worrisome.”

7. Tremendous opportunity lies for American firms to “fill in the gaps” created by Brexit.

With European companies, such as BMW and Michelin, playing such an important role in the Upstate economy, the Upstate business community is watching Brexit closely.
“The key takeaway is that nothing is happening on America’s side regarding trade agreements with the UK or the EU,” Jones said. In fact, the “change may make American firms more competitive. In a worst-case scenario, tariffs will rise between the EU and the UK, meaning that changing relationships between businesses in those countries open up opportunities for US firms that were not competitive in intermediate or final goods trade previous to Brexit, could potentially be competitive.”

There is a real possibility, Jones added, that American firms could “take advantage of the mess that may come after Brexit. The whole economy is going to have to reorient, and US firms can play a role in filling some gaps that may be a result.”

South Carolina is more export-oriented in the EU compared to other American regions, Jones said, citing statistics. “If this opens up our exports even half a percent,” there could be 106 new jobs and $717 million in “value added for the Upstate alone.”