HOME / Upstate SC Blog / What Does the Future Hold for Aerospace in the Upstate?
Upstate SC Alliance Blog View all Posts

What Does the Future Hold for Aerospace in the Upstate? 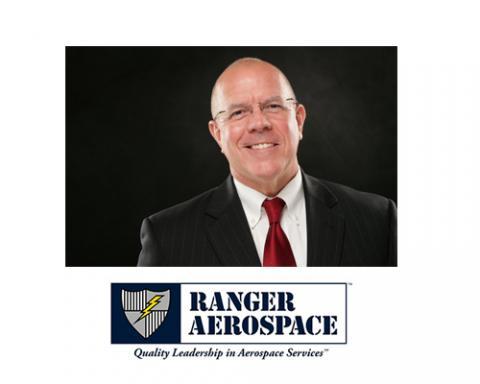 More than 50 aviation and aerospace-related companies, including GE Aviation, Lockheed Martin, Michelin, Cytec, Carbures and more, call Upstate South Carolina home. With close proximity to major OEMs, such as the Boeing facility in Charleston, S.C., Gulfstream in Savannah, Ga., and Honda in North Carolina, the Upstate sits in the center of a growth hub for aerospace. Other resources found in the region include the Advanced Material cluster, educational institutions, and the availability of an ever-growing skilled workforce. This combination adds up to one very positive conclusion: the Upstate is quickly becoming a focal point for the aerospace industry.

As more aerospace firms relocate or expand operations in the region, many turn to the expertise of industry peers here in the Upstate to help their businesses grow. One of the Upstate’s  well-connected resources is Ranger Aerospace, a Greenville-based private equity holding company and management group that teams with investors to grow and improve aviation companies. Founded by Steve Townes in 1997, Ranger Aerospace has recorded over $400 million in buy-and-sell events through its several successful consolidation ventures since inception.

An strong advocate for growth, Townes has also been one of the CEO’s on the South Carolina Aerospace Task Force for the past several years. He recently began acquiring yet again, with Ranger’s newest “consolidation platform” called Ranger AeroSystems LLC closing on its first deal in late 2014.

We recently spoke with Townes, who serves as Ranger Aerospace’s CEO, about the current state of the aviation industry in the Upstate and beyond.

What is driving the growth of the aerospace industry in the region?

As firms like Boeing, Airbus, Gulfstream, and Honda Jet increase their production across the region, the southeastern U.S. continues to experience growth in the aerospace industry and South Carolina is the fastest growing state in the industry. The growth is logical as suppliers naturally want to consider establishing a presence closer to the OEMs. This is being driven by the affordable cost of doing business, favorable tax policies of state and local governments, cost of living for employees, low unionization rates, and attractive incentive packages to start up production facilities. The southeastern United States has become one of the largest and fastest growing regional concentrations of aerospace, aviation, and military clusters in the entire world. It’s not just one factor; it’s the confluence of many positive market forces: 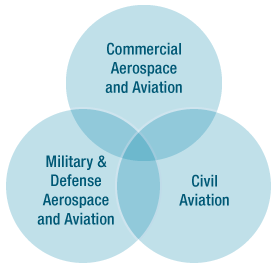 
Does the aerospace industry look at the automotive industry as a blueprint for success in the Upstate?

“I’m confident pundits would make some comparisons, but there are obvious differences. The automotive industry is based on high volume production, whereas aerospace is concentrated on low-volume and high-precision.


From an economic perspective, comparing and contrasting aerospace to automotive is something we have looked at in S.C. In an economic impact study done earlier this year, it showed that since Boeing’s arrival in South Carolina, the aerospace cluster in this state has generated the same number of direct jobs per year as the automotive cluster did between 1990 and 2007 following the arrival of BMW in Spartanburg. In other words, the aerospace industry has had a significantly faster impact.

The aerospace industry is a global and national economic engine, and South Carolina’s future as an aerospace hub is already in front of us. The expansion of this sector promises to bring higher skilled jobs and increased wages as our existing OEM base expands, adds suppliers, and provides opportunities for growth to manufacturers and service companies already in the state. The aerospace industry offers real potential to scale-up employment opportunities for South Carolina’s workers. Employment multipliers for aerospace are higher than other industry sectors, so the total economic impact is greater and ripples strongly throughout our economy. Just look at the 400-plus small to medium sized aviation supply chain companies already growing in South Carolina to understand the multiplier effect—the aerospace sector here is growing like Carolina Kudzu.”

What investments are being made in the area’s infrastructure to help support the growing industry?

“The Upstate region represents a fertile ecosystem for continued aerospace clustering and investment. Clemson University, Greenville Tech, the Next High School and other institutions are among the nation’s top educational centers for feeding highly skilled workers into the aerospace system.

The new Inland Port makes it significantly easier for the aerospace supply chain to operate, providing outreach to over half of the nation’s population and major business centers.

South Carolina’s Upstate region is also a worldwide leader in the research and manufacturing of advanced materials. Materials innovators such as giants Milliken, Michelin, and Toray are all here. With one of the highest numbers of engineers per capita and close proximity to the Southeast’s major aerospace OEMs, the Upstate has attracted more than 50 aerospace companies including GE Aviation, Lockheed Martin, Michelin Aircraft Tire, Cytec, Stevens Aviation, Louis Berger Services, Ranger Aerospace, and Champion Aerospace among many others.

This region is also home to the South Carolina Technology and Aviation Center (SCTAC), a one-of-a-kind 2,600 acre technology and aviation center with an impressive roster of advanced technology and aerospace-specialist tenants. Watch for big things to happen there!”

What improvements are being made in the area of MRO as a result of the changing lifespans of airplanes?

“According to Aviation Week magazine’s 2015 annual MRO Forecast, in commercial aviation alone the MRO market will be $15.8 billion for heavy maintenance and $3 billon for line maintenance. Keep in mind the phenomenon of the “Installed Base”… aerospace assets like airplanes are built to last for decades, yet they require continual overhaul to remain flightworthy. Hence, the aftermarkets are gigantic, larger in fact than new production. Thousands of aftermarket and services jobs are created when airliners, corporate jets, or helicopters roll off the production line, and those jobs stretch for decades beyond the initial delivery.

The aerospace/defense sector is undergoing a once-in-a-generation sea change, with everything up for grabs in ways not seen since the dramatic decades that followed World War II. New planes are built to last longer, with more electronics, more composites, and less maintenance. The proliferation of composites and the adoption of additive manufacturing are causing whole new paradigms and business models.

Unmanned Aerial Vehicles (UAVs) are an imminent wildcard that could transform entire industries such as real estate, security, and logistics services. The electronics content in modern and future planes is dramatic; indeed, the Stealth Bomber could not maintain stable flight without its fly-by-wire technologies. And many of those military technologies eventually find their way into commercial aircraft.

MRO companies are becoming increasingly data-driven, with highly sophisticated software systems supporting the full array of maintenance tasks. The use of wireless systems in MRO is gaining traction and aids aftermarket efficiency, from digital data-loading to connecting technicians with the engineering department. The availability of industrial aviation space and a highly-skilled workforce in the Upstate combine, in my opinion, to make a compelling case for a significant amount of specialty MRO businesses in this region. We are directly in the epicenter of the multi-state regional aerospace clustering phenomenon, with the Upstate also squarely in the center of “Charlanta,” one of the Top Ten mega-regions in the entire world.”

How does this affect the local supply chain for the region?

“South Carolina now has more than 400 companies that self-identify themselves through NAIC codes as an aerospace firm and we know there are many others supporting the industry. Just a few years ago you could count the number of firms with AS9100 certification on two hands, and today over 70 S.C. firms are AS9100 certified—obviously positioning themselves to serve this growing industry sector.

Clusters rely on the continual advancement and investment of companies, infrastructure and technology to maintain a competitive advantage. Other aerospace clusters around the country and the world prove that what we see happening here will continue on a lasting basis. It’s the fundamental nature of this industry for large and small companies to aggregate in favorable regional concentrations.” 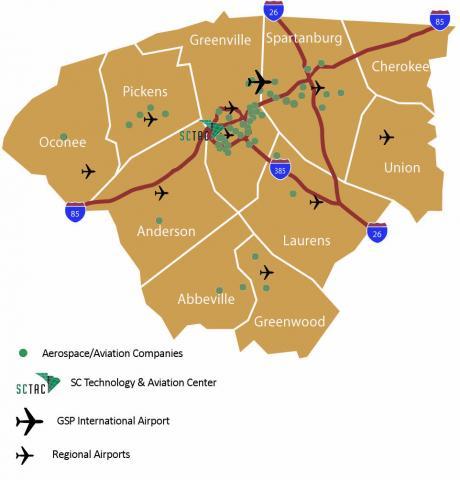 What makes this area an ideal home to aerospace companies?

“A technically trained talent pool is here, and regional universities and vocational colleges have recognized the aerospace industry as a great place for their graduates to land after graduation. The clusters of aerospace firms to serve the industry are becoming a self-propagating supplier ecosystem. Support from local, regional and state economic development organizations is very robust and encouraging.

Quality of life, reasonable cost of living, and yes I’ll say it:  a right-to-work state that makes us highly competitive against northern states. It’s no coincidence that all of the states in the Southeast where aerospace is aggregating are right-to-work states, and S.C. is the epicenter of that.”

Are there benefits when it comes to the workforce available in South Carolina?

“Our state’s technical college system is responsive to the needs of existing industry. The organization known as readySC customizes training programs for specific firms to meet their needs, and career preparation programs such as Apprenticeship Carolina are leading the nation in developing skilled workers for industry.

Let’s not overlook the four large air bases in S.C.: McIntire Joint National Guard base, Charleston AFB, Shaw AFB, Marine Air Station Beaufort. The four military air bases represent a significant economic impact to their communities, are “customers” of MRO and aerospace services and products, and provide a skilled workforce from former servicemen and women who transition to civilian jobs. Plus we’re nearly adjacent to other giant bases with heavy aviation missions such as Fort Bragg, N.C. and the NavalAircraft  Rework Facility in  Jacksonville, Fla.”

Have we already seen more opportunities for people to find aerospace jobs in South Carolina? Is that job pool growing?

“The employment impact here has been phenomenal. The aerospace industry in South Carolina helped lead the state out of the recession and now employs nearly 54,000 people. It’s becoming a major pillar in South Carolina’s economy. With the multiplier effect from suppliers and aerospace workers spending money in the communities, the total jobs supported by the aerospace industry are estimated between 102,000 and 127,000, pumping between $7.3 billion and $8.6 billion in compensation into the state’s economy. The total economic impact is between $17.4 billion and $22.5 billion. I predict these numbers will nearly triple state-wide in the next 10 years, with perhaps almost 1,000 aerospace, aviation, and related support operations in South Carolina. Ten years from now, Charleston Harbor could resemble Puget Sound, and the Upstate will be a beehive of overhaul, engineering, and manufacturing support companies.”

What does the area/state need to do to continue this momentum?

“The Department of Commerce and the South Carolina Council on Competitiveness have established a dedicated team to focus on nurturing the growth of the aerospace sector. These groups are holding events for aerospace firms, convening the organizations that support the industry to encourage collaboration. These efforts need to continue so S.C. can continue the momentum. Senior leaders in the industry need to keep recruiting and advocating for more colleagues to preferentially choose this area for their next expansion.”