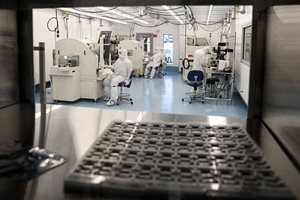 Celebrating its 30th anniversary in South Carolina this year, FUJIFILM is a manufacturer of industrial and commercial imaging products. The company operates five, state-of-the-art manufacturing facilities on its 500-acre campus located at 211 Puckett Ferry Road near Lake Greenwood.
This expansion to FUJIFILM’s 2.5-million-square-foot manufacturing facility will allow for the assembly of electrical parts for inkjet printer heads for a sister company, FUJIFILM Dimatix. Hiring for the new positions is expected to begin in late July or early August 2018, and interested applicants should visit the company’s careers page online.

QUOTES
“FUJIFILM Manufacturing is celebrating its 30th anniversary in Greenwood this year, and I cannot think of anything better for our associates, the community and the company than to announce this expansion, which demonstrates FUJIFILM’s continued commitment to Greenwood County. We appreciate the support from the state and local governments, as well as the Greenwood Partnership Alliance for facilitating investments in existing industries.” -FUJIFILM Manufacturing USA, Inc. President Todd Croker
“Today, we’re proud to celebrate a longtime member of the South Carolina business community. Operating in Greenwood for three decades, FUJIFILM is a perfect testament to the pro-business environment we’ve worked hard to cultivate.” -Gov. Henry McMaster
“South Carolina’s manufacturing sector continues to grow, and this expansion announcement by FUJIFILM is another indication of that fact. Our state’s business-friendly climate and skilled workforce continue to attract investment and help our existing businesses grow. We appreciate FUJIFILM’s decision to continue to do business in the Palmetto State.” -Secretary of Commerce Bobby Hitt
“Greenwood County is pleased to work with FUJIFILM Manufacturing USA, Inc. as they expand their existing operations in our community. FUJIFILM is a high-tech company that has a long and impressive history in Greenwood County, and we look forward to assisting the company as they continue to prosper for many more years.” -Greenwood County Council Chairman Steve Brown
“Today’s announcement shows that cutting-edge companies are finding success in Greenwood County. We celebrate FUJIFILM Manufacturing USA’s decision to increase its footprint here and create 67 new jobs.” -reenwood Partnership Alliance Chair Dr. Kristin Manske
FIVE FAST FACTS