Inside the America-Canada Trade Relationship

Canada, America’s number-one trading partner and the largest export destination for the city of Greenville, does more business with the U.S. than Japan, China and the U.K. combined.

Understanding the significant role Canada plays in our economy could inspire American companies to seize new business opportunities with our neighbors to the north.

In partnership with the World Affairs Council Upstate, we recently welcomed Nadia Theodore, Consul General for Canada in Atlanta, to discuss these opportunities with Upstate business leaders as part of our Grow Your Business event series. 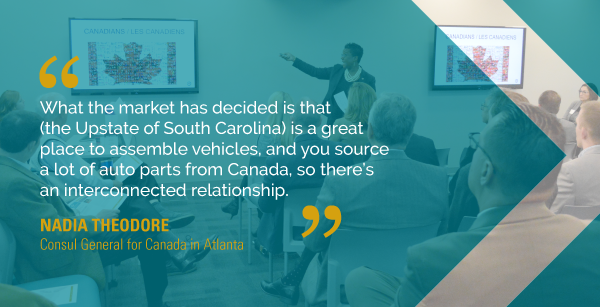 Canada is the world’s second-largest country by area, with six separate time zones and two national languages – though it is home to only 11 percent of the population of the United States. Though Canadians have much in common with Americans – from age to education – migration is a notable differentiator: one in five Canadians was born outside of the country.

In a sense, Theodore says, the nation’s size and population makes it simultaneously big and small.

“That’s an anchor to our focus on international trade,” she adds. Canada has a great deal to offer, “and we can’t trade only with ourselves.”

Canada and the United States share the world’s largest border not protected by military forces and the only joint aerospace security command in the world, an indicator of the “true partnership,” trust and mutually beneficial economic relationship between them.

Outlining what American companies need to understand about doing business in Canada, Theodore describes a strong consumer movement to support Canadian-made products and local businesses. There is tremendous potential, she explains, for companies to expand into the country, “set up shop,” and thus overcome the significant challenge of entering the market without a physical presence.

Canadian products are often sold on both French- and English-speaking store shelves, for both consumer preference and regulatory reasons. The country’s second official language, French, is seen as very important to the business community; incorporating that into any marketing strategy is critical.

As in America, Canada’s consumer trends include a renewed focus on convenience, a push toward smaller portions and a high priority placed on wellness and health. Canadians tend to like discount stores, Theodore notes, but will spend money on luxury and high-end imported goods.

Ninety percent of the Canadian population lives within 100 miles of the American border, and more U.S. tourists come from Canada than anywhere else in the world. That familiarity with American brands and culture could benefit U.S. companies who hope to introduce new brands in Canada, particularly those who become “local” by building manufacturing or distribution centers within its borders.

Expanding in Canada allows American companies to “benefit from a very strong network of trade agreements, including with the EU, Japan and other Asian nations,” Theodore says. Doing so “provides access to those markets at preferential tariff rates.”

What Are We Trading?

South Carolina exports more goods to Canada than to any country besides Germany, but what exactly are we trading?

“Canada sells energy to the United States, provides raw energy materials, and you sell it back to us,” Theodore explains. “We are continuously, more and more, looking for secure, reliable energy partners.” This trend crosses industries: 78 percent of Canadian exports to the U.S. are raw materials, parts and components used to create goods in America.

Other leading exports include cars and automotive parts, machinery, electronic equipment, plastics and medical equipment. “We trade each other a lot of the same things — we sell to you auto parts, fuel, energy, and you sell the same items back to us,” she says, adding that these patterns indicate economic synergy.

The 2018 NAFTA renegotiation made “mostly cosmetic” changes to the original agreement, according to the Brookings Institution. The most notable developments were higher rules-of-origin requirements for automotive manufacturers and a minimal increase of U.S. access to the Canadian dairy market.

“When we were modernizing NAFTA, there was significant discussion about how high tariffs between are two countries really are, and what that means for the trade deficit,” says Theodore. Canada and the United States each have very low average tariffs relative to the rest of the world, at 0.8 percent and 1.6 percent, respectively.

“Most of the stuff we import from non-trade-agreement partners enters our countries duty-free or at a very low tariff rate. And because of our agreement, 99.9 percent of what we trade with the United States is tariff-free.”

In terms of winners and losers, she expands, “When NAFTA was originally negotiated nearly 25 years ago, Canada’s biggest mistake was in the communication of what a trade agreement is and does.” She adds that the agreement may have been oversold to the public, with promises of higher wages for everyone across all sectors and immediate economic benefits.

“What we did not communicate to people is that a trade agreement provides companies the ability to sell their stuff at a cheaper cost by encouraging the countries to focus on producing what they produce best, and vice versa.”

Additionally, Theodore adds, the agreement discouraged companies from producing what is no longer cost-effective.

An agreement like NAFTA creates “an environment for more innovation — more advanced manufacturing, more complex operations to being attracted.” For Canada and the United States, it has meant more complex, technology-forward and higher paying jobs in those higher-skilled sectors.

“What the market has decided is that (the Upstate of South Carolina) is a great place to assemble vehicles, and you source a lot of auto parts from Canada, so there’s an interconnected relationship.”

Today, the technology that goes into vehicles is a booming portion of southern Ontario’s economy.

“When NAFTA was originally negotiated, the internet did not exist. So now businesses are doing business across borders over the Internet — how are we regulating that? How do the United States, Mexico and Canada create trade rules that govern others? We work together. The CPTPP created an international set of rules that many countries have agreed to across the Pacific,” she explains. “When others are looking to create trade rules, they will have that as a baseline.”

We have set the rules, Theodore says, but it is important to know they are not age-less. “As a trade agreement ages, companies and countries find ways to get around the rules. They learn tricks of the trade. To be the North American force that is going to continue to compete against the world and win, as we do, we need to ensure the benefits we set out for our North American partners are only benefited by” those parties. Preferential treatment, she says, should not be achieved nor rules circumvented by “countries who want the benefits but have none of the responsibilities outlined” in NAFTA.

For this reason, the agreement increased how much product must be manufactured in North America to earn a preferential tariff rate. On the other hand, “we also need rules that are flexible enough that I can source parts that can’t be found here in North America. If we could only source from the United States, Canada and Mexico,” a product might become excessively expensive to produce.

South Carolinian companies hoping to trade with or expand into Canada don’t have to do so alone.

In addition to support resources such as the South Carolina Department of Commerce and U.S. Commercial Service, companies looking to do business in Canada can tap into the Southern United States Trade Association, the U.S. Embassy or the American consulate in a particular province.

“There are fantastic people in cities like Toronto, responsible for helping companies export to that region.”

Expert help is invaluable for overcoming barriers to entry, providing insight and contacts within every province of Canada, she explains.

“If you’re looking to source Canadian products or grow your presence in Canada physically, looking for supply chain input or help financing supply chain, our services are free of charge. We are here to help you trade with us.”

Her agency also works to support the opposite – Canadian companies expanding southward. “When our companies want to export their stuff to the United States, that’s win-win. It’s fantastic. They’re growing, bringing it back to Canada and supporting our economy even better.”

The Future of America’s Trade Relationship with Canada

So which services are needed in Canada, and what industries are ripe for American investment?

“Anything cyber” holds great potential, she says. “Artificial intelligence (AI), real estate technology, healthcare technology. To me, the need is really in the future industries.”

In the “big T tech space,” the Southeast and Canada are becoming big players, especially in cyber security and AI, she notes. “It would behoove our countries to work together and shape the rules of that space before others do.”

In short, says Theodore, the years ahead will only bring more opportunities for American companies to trade with her country.

“Canada and the United States, in my view, will work more and more together in the future.”