From basement to Dubai 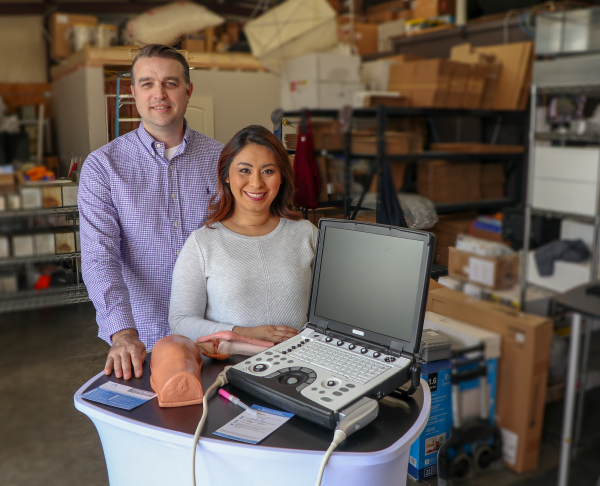 Imagine a gelatin solution that mimics soft human tissue. One that doesn’t require refrigeration, and that opens doors to a world of medical industry research and training without the obstacles that come with cadavers.

The product exists, developed eight years ago by Joel Edwards in his Arkansas basement. It was sparked by an idea, and initially sold to defense companies for testing under the name Clear Ballistics.

One Greenville area physician exhibited such great interest that his inquiries and ideas led to product innovations, a collaborative relationship, and ultimately, Edwards’ eyes on the Upstate.

“He was asking us to do all these things, and I said, ‘We don’t make all these things, we’re just a ballistics company for people to test their weapons and ammunition on,’” Edwards says. “It took me about two years to understand the calling and opportunities of medical. We never in our wildest dreams thought that it would get this big.”

In 2018, Edwards relocated both Clear Ballistics and Humimic Medical to Greenville, South Carolina, where four employees handle production, distribution and retail from a 2,500-square-foot facility.

Building the Business and a World of Applications

“What they’re trying to do, and why they like our products, is they’re trying to remove the equation of the biological waste from cadavers to animals to clinical trials on patients,” Edwards says. “The only bad part of R&D work is you never really get to find out what they’re doing.”

This progress has been eight years in the making, Edwards says. In the early stages, he and his wife Alex plugged away at the businesses while maintaining fulltime corporate jobs, his in IT and hers in the medical industry.

Then, the business was self-funded, sustained by a $10,000 credit card limit, with all revenue returning to company operations and improvement. It took three years before the first employee was hired, and even then, Edwards says, “It wasn’t me, because I was too scared to call it quits,” at his IT job.

The Edwards also saw value in attending trade shows. Their first major one was Shot Show in Las Vegas three years ago, one they attended again in January 2019.

“The first time we were there, we were asked to leave several booths because we were that ugly duckling, the new kids on the block,” Edwards says with a laugh. “These young kids trying to change something in the marketplace that’s been there for 40 years.”

Corporate insights informed the business plan, though: Edwards established a sophisticated web presence, worked to have company land on page one of Google results, and gave product samples to social media influencers to drive product interest.

That adaptability, says Edwards, “was when things really started clicking.”

This week, Edwards has the opportunity to showcase Humimic products at the Arab Health medical conference from Jan. 28-31 in Dubai.

Humimic and three other Upstate companies – Poly-Med, Tactical Medical Solutions and Global Transplant Solutions – are among 44,150 exhibiting companies, with an audience of 84,500 healthcare and trade professionals representing 160 countries.

The companies are extensions of “Team South Carolina,” joined by the S.C. Department of Commerce, SCBio life sciences organization, and team members from organizations such as the Upstate SC Alliance and Charleston Regional Development Alliance.

South Carolina has made waves for its team approach, leveraging these events to represent the state for industrial recruitment and while helping existing industries grow.

This collaborative, forward-thinking approach, combined with resources such as the South Carolina Research Authority, are among factors that attracted Edwards to the Upstate.

“It paints an impressive picture that economic developers from across the Palmetto State stand together in telling our story, alongside the industry leaders who can offer their perspective, all while we deepen our industry knowledge and connections,” says Amy Thomson, Director of International Strategy and Trade for the S.C. Department of Commerce.

From the small business perspective, participating in a state-led exhibition alleviates exhibition costs and planning while maximizing the company’s presence, Edwards added.

What does the Humimic team hope to gain from attending Arab Health?

“We’re one of these companies that we like to learn, and we want to make sure our consumers are happy about it,” Edwards says. “We do not go to any show at all and think that we’re going to write purchase orders.”