The Upstate SC Alliance was formed nearly 20 years ago to build our region’s business environment and establish international ties. And a recent article from the United Kingdom’s North East Times showcases how our Business Recruitment team is partnering with Womble Bond Dickinson to strengthen Transatlantic business ties.

The collaboration between Womble Bond Dickinson – formed in 2017 through the coming together of UK-based Bond Dickinson and US- based Womble Carlyle Sandridge & Rice – and regional development bodies such as Upstate South Carolina Alliance, clears new pathways for businesses to break into the United States.

We’re working with the firm, a Board Level Investor in the Upstate Alliance, to establish international relationships that can help Upstate companies grow their international footprints, while also supporting businesses based in the United Kingdom as they explore what it means to enter the American market.

The two regions share great synergy and business potential, especially among the automotive and chemicals sectors. Additional common ties: traditional manufacturing and engineering industries, with growing professional services, digital and life science sectors. Don’t just take our word for it; read on see what our partners across the pond are saying. 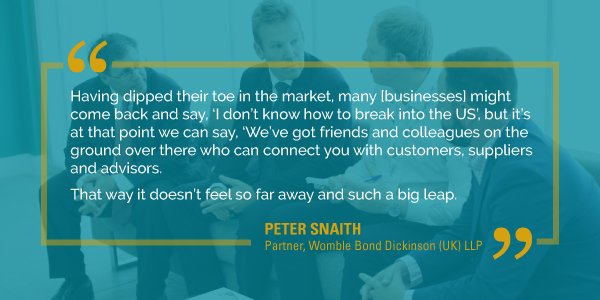 As the largest single market for the UK outside Europe, the US is hugely important to Britain’s business landscape and economy. Newcastle-based transatlantic law firm Womble Bond Dickinson is working alongside Upstate South Carolina Alliance to further strengthen ties between the two countries and increase North East business’ opportunities to expand. Steven Hugill finds out more

“I was born in the North East and really want the region to thrive,” says Womble Bond Dickinson’s Peter Snaith.

“There are some massive opportunities here and I want people to stay and work in top-class businesses, rather than think they have to go to London.”

Peter’s ambition is reflective of a determination that spreads throughout Newcastle-based Womble Bond Dickinson, where he is a partner in the law firm’s commercial team and head of its manufacturing sector group.

A strategic vehicle in the transatlantic firm’s mission is its partnership forged through its office in Greenville South Carolina with the Upstate South Carolina Alliance, the public and private regional economic development organisation that markets and promotes the commercial credentials of the US state’s North-West corner.

A business-rich, ten-county region connecting the cities of Atlanta and Charlotte, the Upstate is home to pioneering aerospace, engineered materials and life science firms.

It also houses food manufacturers including Nestlé and automotive sector operators Michelin and BMW, the latter employing more than 11,000 people in the Upstate.

The collaboration between Womble Bond Dickinson – formed in 2017 through the coming together of UK-based Bond Dickinson and US- based Womble Carlyle Sandridge & Rice – and regional development bodies such as Upstate South Carolina Alliance, clears new pathways for businesses to break into the US.

Crucially, however, it also allows for American companies and organisations to embrace opportunities across the North East’s traditional manufacturing and engineering industries and also tap into the region’s ever-growing professional services, digital and life science sectors.

“There are a lot of synergies between the North East of England and the South East of America,” says Darlington-born Peter, “and there is a very complementary fit in terms of businesses and opportunities we can support together, such as the automotive and chemicals sectors.”

“The ability for us to take North East businesses out to the US is really powerful too; it links in neatly with the Government’s export strategy of trying to get businesses to broaden their horizons and realise opportunities further afield.”

The partnership’s importance is borne out in statistics that show the US – excluding Europe – is the UK’s biggest single market and the country’s top trading partner on a country-by-country basis.

According to latest Government figures, updated in September, trade between the UK and US topped £190 billion in 2018, which was nearly £70 billion more than the UK’s relationship with Germany, its second-largest trading partner by value.

Peter says the work of Womble Bond Dickinson – which has three offices in South Carolina as well as 19 others across the US; including the most recent addition in Houston, which opened earlier this year – makes it easier for UK firms to cross the Atlantic by providing access to support that can address some of the perceived risks and help remove the psychological barriers associated with doing business in the US.

Highlighting the firm’s work with the North East Automotive Alliance (NEAA), the industry-led cluster group founded to aid the sector’s growth and competitiveness in the region, he says its assistance gives local companies confidence to expand.

“If we can help get businesses across to the US on trade missions in collaboration with the likes of the NEAA and DIT, for example, they can see the opportunity,” he says.

“Having dipped their toe in the market, many might come back and say, ‘I don’t know how to break into the US’, but it’s at that point we can say, ‘we’ve got friends and colleagues on the ground over there who can connect you with customers, suppliers and advisors.

“That way it doesn’t feel so far away and such a big leap.

“There are more people in the US spending more money and there are bigger businesses too,” continues Peter.

“Nissan is enormous here in the North East – it is the most productive car manufacturing plant in Europe – but BMW in Upstate South Carolina is another scale up again.

“If you can tap into the supply chain here and then sell the same products or services over there, you could more than double your sales in one shot,” he adds.

The process of identifying opportunities and facilitating their progression is at the crux of Upstate South Carolina Alliance’s work, says Jacob Hickman, director of business recruitment for the Alliance. He adds the organisation’s partnership with Womble Bond Dickinson is crucial to showcasing the state’s commercial potential.

“Womble Bond Dickinson is a great partner with us, and our relationship really opens up networks in the UK,” says Jacob.

“They have a lot of clients that might be curious about the US, so working with them helps maximise the exposure of South Carolina. “Additionally, when we are courting companies

to come to South Carolina and they ask very specific questions about the structure of their US entity or labour and immigration laws, we can reach out to trusted partners such as Womble Bond Dickinson.

“They can also steer us to where emerging technology is coming out of the UK.”

Using the automotive sector as an example again – the Upstate region sits close to the US’ car making hotbed that includes, among others, Volkswagen, Ford, Toyota, Honda, Nissan, Mercedes-Benz and General Motors plants – Jacob says the partnership’s synergies mean North East companies are much less daunted about expanding across the Atlantic.

“We are engaged with the NEAA because it is exactly the type of relationship we want to grow,” adds Jacob, who attended the automotive organisation’s Sunderland-based expo in late September when Upstate South Carolina was VIP lunch sponsor.

“NEAA has strong companies that supply the automotive sector, and we have got strong automotive companies in the Upstate.

“We also have incredible training programmes and a great backbone of engineering talent, so there is good opportunity to help connect and align the automotive industry as well as other manufacturing sub-sectors on both sides of the Atlantic,” continues Jacob.

“By being involved with NEAA, we can act as a point of contact for companies wanting information on potential expansion locations in the US, for example, which allows us to highlight how the cost of facilities, taxes, labour and power are all much less expensive in Upstate South Carolina.

“The US is a massive marketplace for businesses; it’s a big, healthy economy with a lot of opportunity to grow, and the Upstate is a business-based community that provides a lot of support.

“We want North East companies coming over to succeed.”

Is your company interested in learning more about the Alliance’s international connections? Contact Jacob Hickman, Director of Business Recruitment, for more information.