When Walgreens opened the doors in 2007 to its $180 million Anderson County distribution facility, the pharmacy retailer ushered in a 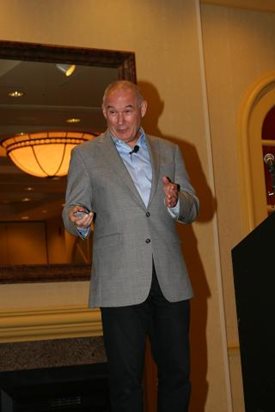 The move to hire a population often overlooked was spearheaded by Randy Lewis, then senior vice president of Supply Chain & Logistics for the Illinois-based retailer and founder of the NOGWOD Disability Initiative — and it was inspired by his experience raising a son with autism.

Speaking to approximately 200 on Tuesday at the Ten at the Top Upstate Vision Forum focused on the Upstate’s untapped workforce, Lewis reflected on the decisions that inspired the staffing strategy and boasted the successes of the Anderson distribution center.

The event aimed to raise awareness for disabled and disadvantaged candidates and to connect employers with Greenville Can, a coalition of 11 local disability employment service providers who provide assistance finding, hiring, training and retaining employees.

“A job can make a difference, it changes the arc of life,” Lewis said. “It can mean independence; it can mean friends; it can mean all of the things that we as parents hope for.”

Being challenged to look past his son’s shortcomings, recognize his attention to detail and identify that “all victories become big victories” for people with special needs helped Lewis to recognize that people of all ability levels can add value in the workplace.

Over time, the Anderson facility hired 350 employees with various disabilities — the majority of whom did not have traditional work experience — in equal jobs, earning equal wages as their traditionally abled colleagues, and with minimal expenditure for workplace accommodations.

The initiative paid off. The site boasts both the highest productivity rate and lowest incidence of safety issues, and it paved the way for Walgreens to replicate the model in other markets, hiring more than 1,000 employees with disabilities throughout its supply chain division.

More than 10 percent of Walgreens logistics workforce is composed of people with disabilities who perform the same jobs, earn the same pay and are held to the same performance standards as fellow team members. And the practice has inspired several Fortune 500 companies such as Procter & Gamble, Best Buy, T.J. Maxx, Sears, and Lowe’s to seek the retailer’s guidance in implementing similar hiring strategies.

Upstate Alliance CEO John Lummus led the Anderson County economic development team that brought Walgreens to the community and fostered a connection with agencies that served residents with disabilities.

“When they told me about their initiative to hire up to 40 percent of their workforce from the disabled population, I was incredibly excited and thankful that their company had this commitment to do the right thing, and also to do it right here in the Upstate of South Carolina,” Lummus said. “As we heard from Randy, this initiative was not only the right thing to do, it has been proven that individuals with disabilities perform at or above the level of traditionally abled employees in regard to productivity, safety, and attendance. I certainly hope that more companies in the Upstate will consider following the lead of Walgreens in their hiring processes.”

On April 21, the South Carolina Department of Commerce announced that The Lighthouse for the Blind, Inc., will establish a $2 million manufacturing facility in Dorchester County that specializes in product assembly and light manufacturing for the aerospace sector and will focus on employment and training for blind individuals.

In the Upstate, additional sectors are embracing populations who traditionally have challenges entering the workforce, such as those with disabilities or past legal troubles, according to Ann Angermeier, executive director for the Upstate Workforce Investment Board.

Angermeier cited the success of Project SEARCH, initiated in 2014 in collaboration with Vocational Rehabilitation and Spartanburg Regional Healthcare System, which provides education and training to young adults with intellectual and development disabilities. Student interns complete rotations in hospital support roles, such as laundry, transport and sanitation services. Each program graduate has been placed in a full-time job, and six of eight graduates remained with the healthcare system.

TOPICS: Upstate Thoughts, News You Can Use