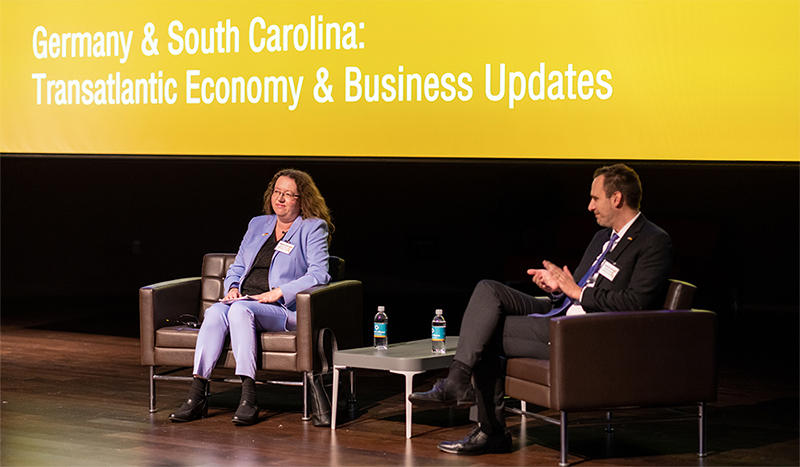 The Upstate SC Alliance recently partnered with the European American Chamber of Commerce – Carolinas, German American Chamber of Commerce of the Southern U.S., and World Affairs Council Upstate to host an event featuring business and trade updates from Germany. With nearly 140 German companies calling Upstate South Carolina home, it’s no surprise that Germany represents the one of the largest international source of jobs in the Carolinas.

At the event, two keynote speakers took the stage: Melanie Moltmann, Consul General of Germany in Atlanta, and Matthias Hoffmann, President & CEO of the German American Chamber of Commerce of the Southern U.S. Each openly shared the challenges currently facing Germany businesses — and the opportunities they are finding in the United States.

Effects from the war in Ukraine

Given that Germany’s economy has historically been intertwined with Ukraine’s supply chains, Melanie Moltmann described how Russia’s war in Ukraine has caused uncertainty for the German industry. “It has become clear that we have to do something with our supply chains,” Moltmann said, suggesting that current supply chains need to become shorter, more resilient, and contain more redundancies.

She shared that Germany is working to transform its energy system by decreasing its coal usage to zero, and by phasing out oil and natural gas lines from Russia. At the beginning of 2022, the amount of oil that Germany sourced from Russia made up 40% of its total supply and has dropped sharply to about 20% today, Moltmann said.

Moltmann acknowledges that these changes have caused soaring energy costs throughout Europe, but said that even though these challenges will push us, they will also pave the way for innovation.

An optimistic outlook for German companies

Matthias Hoffman added that, despite the challenges resulting from the pandemic and the war in Ukraine, 62% of German companies say their business is running well.

In a survey of 92 German chambers and 120 offices across the globe, participants indicated that they do expect the recession to hit them, but they haven’t felt it yet and anticipate a “soft landing.” One reason for this may be that companies still have a backlog and full order books that would carry them through a potential economic downturn. 56% of members also believe that the economy will get better within 12 months and are not too worried about the future. In fact, 39% of Germany’s companies actually want to invest more than in previous years.

Why German businesses are interested in the United States

In addition to their positive view of the economic future, many German companies are also interested in bringing their business to America. “The U.S. has — by far — the most optimistic outlook for investment,” Hoffmann explained. One important distinction is that, for German companies, the U.S. is primarily an expansion market, allowing companies to maintain their current customers and operations in Germany while also expanding their business footprint.

Hoffmann cited several reasons why the United States is so appealing to German companies. First, the market size and high consumer demand are attractive for foreign investment, and have helped many Germany companies in the past to put down lasting roots in America.

Second, U.S. states and local governments are “hungry for investments” and are willing to help businesses get on their feet in a way that doesn’t typically happen in Germany. South Carolina’s presence in Germany, with its longstanding European office that has been in Germany since the 1980s, has also gone a long way in helping German companies becomes more familiar and comfortable with the prospect of moving to the Palmetto State.

Third, as high energy costs in Europe continue to be a barrier, the more affordable energy costs in the United States have become more appealing to would-be transplants.

Finally, Hoffmann explained that the United States has a resilient economy and tends to bounce back quickly. He said that southern states in particular tend to be robust, indicating BMW’s incredible output in 2020 despite the supply chain issues and challenges of that time.

German companies have made a huge impact on the South Carolina Upstate, helping to shape the region into the manufacturing and innovation powerhouse that it is today. As Germany and South Carolina continue to grow their economic relationship and solve problems together, we look forward to seeing what this partnership brings in the future.