Spend time with Thang Nguyen and Brooks Hafner, and you’ll get a glimpse at just how much the Upstate is powered by engineers.
In Greenwood, Nguyen works in a sprawling plant at FUJIFILM Manufacturing USA Inc., where thin aluminum sheets are coated with photo-sensitive layers used in offset printing presses.

Over in Westminster, Oconee County, Hafner, an engineer at an ITT Control and Connect Technologies site, shows off gizmos that make other gadgets move. 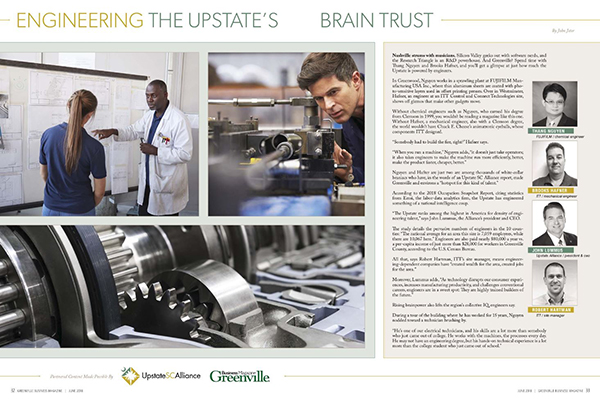 They are among two of the Upstate’s dense concentration of engineering talent, contributing to product development and process improvement within the Upstate that has benefits across the globe.

Greenville Business Magazine recently explored the Upstate’s engineering environment, with data and commentary from the Upstate SC Alliance supported by stories from industries and Clemson University. Here is an exceprt:

Without chemical engineers such as Nguyen, who earned his degree from Clemson in 1999, you wouldn’t be reading a magazine like this one. Without Hafner, a mechanical engineer, also with a Clemson degree, the world wouldn’t have Chuck E. Cheese’s animatronic eyeballs, whose components ITT designed.
“Somebody had to build the fire, right?” Hafner says.
“When you run a machine,” Nguyen adds, “it doesn’t just take operators; it also takes engineers to make the machine run more efficiently, better, make the product faster, cheaper, better.”
Nguyen and Hafter are just two are among thousands of white-collar braniacs who have, in the words of an Upstate SC Alliance report, made Greenville and environs a “hotspot for this kind of talent.”
According to the 2018 Occupation Snapshot Report, citing statistics from Emsi, the labor-data analytics firm, the Upstate has engineered something of a national intelligence coup.
“The Upstate ranks among the highest in America for density of engineering talent,” says John Lummus, the Alliance’s president and CEO.
The study details the pervasive numbers of engineers in the 10 counties: “The national average for an area this size is 7,059 employees, while there are 10,067 here.” Engineers are also paid nearly $80,000 a year vs. a per-capita income of just more than $28,000 for workers in Greenville County, according to the U.S. Census Bureau. 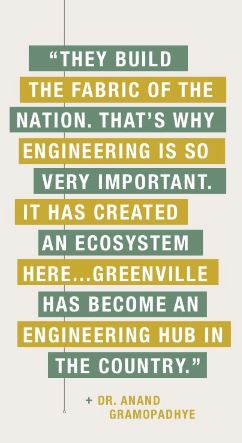 All that, says Robert Hartman, ITT’s site manager, means engineering-dependent companies have “created wealth for the area, created jobs for the area.”
Moreover, Lummus adds, “As technology disrupts our consumer experiences, increases manufacturing productivity, and challenges conventional careers, engineers are in a sweet spot: They are highly trained builders of the future.”
Rising brainpower also lifts the region’s collective IQ, engineers say.
During a tour of the building where he has worked for 15 years, Nguyen nodded toward a technician brushing by.
“He’s one of our electrical technicians, and his skills are a lot more than somebody who just came out of college. He works with the machines, the processes every day. He may not have an engineering degree, but his hands-on technical experience is a lot more than the college student who just came out of school.”
Back over at a conference table at ITT, Hafner calls machinists, computer numeric control operators, and non-degreed techs “engineers by experience.”
“You’ll find people with really strong technical skills. If they had that education, they’d be dangerous,” he says. “These guys that have been doing this for a while; they’re sharp. It’s amazing what they can do.”
Hartman adds: “Having this discipline here, having this critical mass of engineers, has allowed well-known companies to come here because they can get the talent. They wouldn’t come here if they couldn’t get the talent.”
It would take an engineer to determine whether the mechanical chicken came before the trigonometric egg—did such behemoths as BMW and Michelin come here because of so many engineers around Greenville, or did these giants attract them?
“I’m biased as an engineer,” says Dr. Anand Gramopadhye, professor and dean of Clemson’s College of Engineering, Computing, and Applied Sciences, “but engineers do one thing really well: They promote economic development. They create things—they don’t talk about it—they create things: cars, turbines, products that sell.”