October 30, 2017
In the summer of 2016, a joint statement was issued by then-President Barack Obama and India Prime Minister Narendra Modi that called the relationship between the United States and India a “defining partnership for the 21st century.”
Together, the national leaders laid out a plan to partner in improving the technology, health and homeland security of each nation. It’s a sentiment that was echoed this summer, as President Donald Trump and Prime Minister Modi jointly spoke about the level of collaboration and cooperation between the two nations.
It’s no surprise that this relationship has been the focus of recent presidential administrations and has received bipartisan support from Congress. One of the fastest growing and largest economies in the world, India aligns with America’s interests and values, giving the partnership every opportunity to thrive. 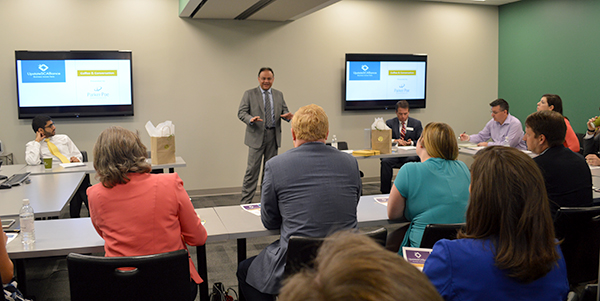 Nagesh Singh, India’s Consul General for the American Southeast, agrees that the United States and India, the world’s oldest and largest democracies, respectively, have much in common. He shared this message with a crowd of 50 Upstate SC Alliance investors during the September Coffee & Conversation.
He says the nations’ burgeoning trade relationship has a bright future due in part to the size of the Indian diaspora in the U.S. With 4 million Indian-Americans, Singh reiterates laughingly, “there’s no getting away from us.” Even more, expats take their “positive business narrative back to India,” fostering further interest in and appreciation for our industries.
Obama referred to the Indian-American community as a “living, vibrant bridge” between our nations, and their success a reflection of “what we can do when we join together.”
“India has always appreciated the greatness of this country, how you provide opportunity,” Singh says. He notes that one in seven American physicians are of Indian heritage, as well as the CEOs of Google, Microsoft, Nokia and other Fortune 500 companies; America’s current ambassador to the United Nations, South Carolina native and immediate past governor, Nikki Haley, is also of Indian heritage.

Indian-Americans are not the only key to the growing partnership; the bedrock of the relationship is the economic impact each nation has on the other. As American businesses take note of the world’s fifth-largest economy and third-largest purchasing power, more and more companies are bringing their products to market in India.
Commercial connections between the United States and India continue to increase, and are another crucial component of this multi-faceted relationship. Total bilateral trade, both goods and services, increased nearly 15 percent year over year between 2000 and 2015.
“Trade between our nations is the world’s last great megamarket,” Singh says. “I believe we are positioning our private sectors to take advantage of that.”
Currently estimated to have $120 billion in bilateral trade, the United States aims to increase that number to $500 billion by 2025, according President Obama. India was America’s ninth-largest goods trading partner and 18th-largest goods export market in 2016, but achieving this goal would skyrocket those numbers.
According to Singh, the reverse inflow from India is a significant source of foreign direct investment in American manufacturing, IT and hospitality industries in particular. He estimates that 90 percent of Indian companies want to invest more in America, and 95 percent want to hire locally when they expand their business here. 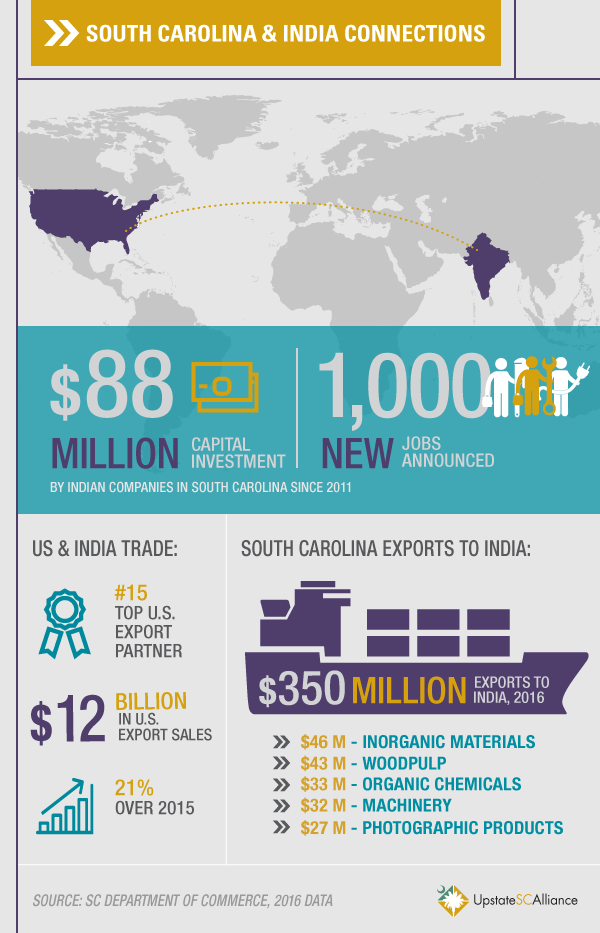 These numbers are powerful, painting a picture of companies relocating here and bringing investment, jobs and opportunity with them.
To bring these visions to life, the South Carolina Department of Commerce has made several trade missions to India in recent years. Morgan Crapps, an attorney with Nexsen Pruet who focuses her practice on economic development projects, went on one of the first missions in 2014.
At the time, India ranked 16th in investment among foreign-based companies in South Carolina; after the first trip, the Department of Commerce opened an Indian office that “has been bustling since,” says Crapps. She notes that at least two Upstate companies have participated in these trade missions, and businesses from a variety of sectors represent our state there annually.
Ambassador Haley, an Indian-American who was then governor of South Carolina, joined the 2014 delegation to India. Her presence created a “very favorable buzz” abroad, notes Crapps, and “gave South Carolina a real foot in the door in a way we hadn’t seen before.”
During the 10-day trip, Haley visited New Delhi, Mumbai and the Punjab state, where her parents were born. Haley held 52 meetings during the 2014 trade mission, resulting in 15 business prospects in the pipeline for the Department of Commerce.
Next month another delegation from the state’s Department of Commerce heads to India for its annual trade mission. The trip will allow representatives to promote South Carolina businesses, learn more about the Indian market and business practices, and make professional connections within the country.

When Singh is asked why his constituents bring their businesses to the Southeast, his response is rapid-fire. “It’s the ease of doing business here, your economic size and growth, the low cost of living and doing business, the prestige of bringing your product to the American market.”
He elaborates, “Our CEOs see BMW making their home here; that brings a lot of prestige to mind when they think about this region. There’s a distinction that comes with selling your product in that same market and situating your business alongside companies like that.”
When an Indian company builds a factory in the United States, the benefits are two-fold. One side gets quality jobs and capital invested into its community; the other gets new technology, skilled labor and an ease of trade both when selling in the U.S. or exporting back to India.
As for why American businesses should engage the Indian market, Singh’s answers are just as clear, “We have a retail market of $600 billion, a growing middle class, one billion cell phone users, 400 million internet users, and what will be the third-largest TV-buying market very soon. Forty percent of the automobiles purchased in India are imported, and we see similar numbers in the electronics sector as well.”
“There is such an opportunity in the Upstate for companies relocating their facilities,” Crapps agrees. “If you’re looking to move into the American market, South Carolina is a great place to do it. We have a low cost of doing business; everything from electricity to land to labor can be less than in other areas. We have workforce training programs that benefit such companies as well. For projects where companies are already exporting heavily in the United States, it can make sense to relocate production here; sometimes we also see companies pursuing a move if their clients require them to be closer.”
Crapps, who focuses on bringing investment into the state, says “there are lots of projects that are coming from India to the Southeast, and we are right on the tip of hopefully seeing a lot of activity. There are many projects in the works right now, and more Indian companies who are very seriously looking at operations here. South Carolina has been lucky to leverage (former) Gov. Haley’s leadership and connections within India; it has opened doors for our businesses to expand and our economy to grow.”

Business leaders are not the only ones promoting the Upstate to potential investors abroad. The Upstate’s Clemson University has developed partnerships that benefit our state academically and economically. Brij Khorana, chief scientific advisor for Clemson’s College of Engineering, Computing and Applied Sciences, manages exchange programs that have students and faculty shuttling regularly between India and the Upstate. These programs, designed to promote and strengthen the school’s International Center for Automotive Research, are indicative of a burgeoning manufacturing partnership.
“I think Clemson could become a household name in India in electric and hybrid vehicles and biomedical devices,” he says. “Once some of that recognition arises, the number of Indian-based companies that want to locate in Greenville will just keep increasing. We just need to keep building up those connections.”
Another significant bilateral India-U.S. trade sector is the defense industry; the nations’ governments are codeveloping and coproducing cutting-edge defense technology, demonstrating what Singh calls “an exceptional trust and closeness.”
“South Carolina has such a strong military presence and so many military contractors. It will be fascinating to see how the defense industry and our ties to Indian defense companies grow over the coming years,” says Crapps. She also sees the pharmaceutical industry as one ripe for growth in partnership with Indian businesses, an idea Singh mentions as well.

Deepening America’s two-way trade relationship with India will take buy-in—both literal and figurative—from our businesses, as well as time and commitment. With our countries’ aligned strategic goals, however, the years ahead could be prosperous ones on both sides of our partnership.
“In my mind, there’s no better place to start than right here in this region,” Singh agrees. “Even the sky is not the limit.”
TOPICS: Business Recruitment, International