An unassuming man recently visited the Upstate while on a tireless journey across 45 cities in 50 days, brought here in connection with the World Affairs Council of the Upstate.

Building partnerships to enhance the economy and connectivity of his homeland of Nepal was his mission, a labor of love since he graduated from the University of Nebraska 26 years ago.

Mahabir Pun has no paying job, so to speak, though he’s focused his energy for decades on identifying sustainable, collaborative solutions that use American innovation to improve quality of life across the globe.

During his visit, Pun visited with Clemson University, members of the World Affairs Council Upstate, and Nepalese and Indian engineers to explore opportunities for collaboration. 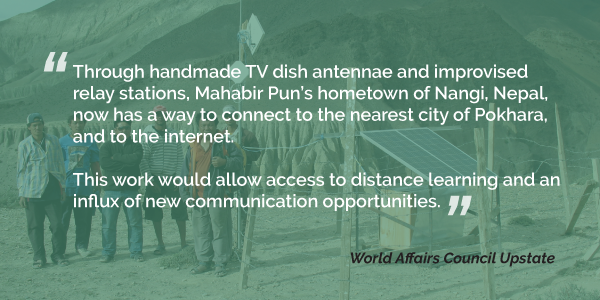 But how does one build a future with no finances at hand? How do you build entrepreneurship from the hard, rocky ground up? How do you build new life into a country where talent retention does not exist and the bright students must seek jobs far from home?

Nepal is one of the world’s least economically developed countries. More than 90 percent of the goods its residents need are manufactured elsewhere and imported. As a result, young, innovative and creative talents are being lost at an alarming rate.

When Pun first returned to his country after attending university in the United States, he quickly realized there were no jobs to fit his skills. He asked the community what they needed help with and the response was immediate: “We need a high school.”

He eventually built a second one, involving village families into economic development projects to make the schools sustainable. From making cheese to creating decorative paper products to sell to tourists, every undertaking was aimed at raising the standard of living while providing educational opportunity to future students.

The Himanchal High School founded by Pun focuses on computer education and programs thought to be best for future income generation. There was a hurdle, though: computers are expensive.

“What does Nepal have in plenty?” Pun pondered. The answer: Tourists from many different countries. An idea was born to connect the school with used computer parts so that machines could be affordably built.

Pun campaigned in the United States, Japan, Malaysia, Australia, and Singapore for donations. The computers were powered by two small hydro-generators—sustainably powered by the running water of a nearby creek.

From there, villages established the ability to connect and communicate. Over two years, Pun and his supporters worked to develop a system to address the complicated prospect of getting wireless signals across the vast, mountainous land that separates villages from each other.

Through handmade TV dish antennae and improvised relay stations, Pun’s hometown of Nangi now had a way to connect to the nearest city of Pokhara, and to the internet. This work would allow access to distance learning and an influx of new communication opportunities.

With traction on these efforts, Pun is working to bring a National Innovation Center (NIC) to life.

Registered as a non-profit in 2012, the NIC’s vision is to create a culture of research and development in Nepal and to help nurture and promote innovation-based ecosystems by employing both bottom-up and top-down approaches. The vision also includes a program to match talented researchers and scientists who work abroad, mentors in fact, with young Nepalese participants.

The Center currently has 42 researchers and innovators working across different parts of Nepal, with projects from drones delivering medicine, to solar powered cooling suits, to ATV’s that can traverse the exceptionally rough terrain.

Within this realm lies the potential for partnership with South Carolina’s innovators and industries. Think: automotive research into vehicles equipped to tackle that terrain, or telecommunications solutions that would establish WiFi in remote areas.

Pun’s story is an example of how collaborative innovation changes lives, and actions in one part of the world can have a ripple effect across the globe.