August 22, 2018
Investment by the millions and job creation by the hundreds.
Massive numbers tend to drive our economic impact stories, but there’s a person paired with every job in our region.
Jason Sams, a furnace operator with Solar Atmospheres Southeast, is one of the Upstate beneficiaries of new business investment.
A native of Dacusville in Pickens County, Sams laughs that his job is to “cook metal in the oven” for a living. But it’s so much more than that: Sams and his coworkers change the characteristics of titanium, stainless steel, and tool steels for use in the aerospace industry.
“My job fulfills me in a couple different ways,” he adds. “It’s challenging, it’ll keep you on your toes from time to time. There’s always something new, always something new to learn.”

Sams earned his GED through Foothills Family Resources, and the organization then aided him in completion of a Greenville Technical College manufacturing course series in quality and measurements. It also included resume preparations and company introductions, which connected him to Solar Atmospheres.
“I’ve always worked with my hands and been really hands on,” Sams says. “It’s a really interesting field changing the properties of metal, and there’s a lot to learn. Having the ability to do a job so close to home, not having to uproot my life” is of immense value to him and his family. 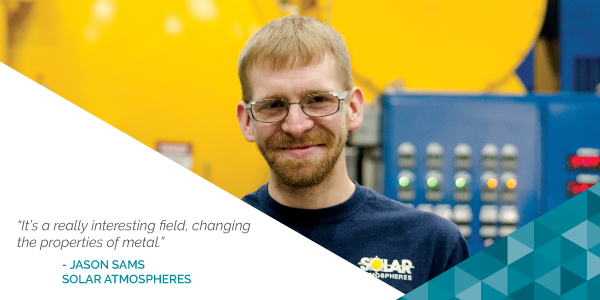 While quality of life and proximity to family may keep Sams in the Upstate, access to rewarding jobs in his field makes it easier to build a bright future.
“It’s great that the manufacturing scene’s picking back up in the South,” he says, particularly because the Upstate “has been one of the manufacturing textile leaders of the world since manufacturing began.”
Sams sees only more growth ahead for the industry and for Solar Atmospheres, which opened its Greenville facility in 2015. “It’s good to see how the company’s growing, to see all the opportunities that it brings.”
“As the manufacturing scene grows, Solar Atmospheres has the opportunity to grow. With more customers in the area, that’s more parts needed, it’s more heat treating, more work that will be available.”
Sams adds that the Upstate’s growth provides him and his colleagues “opportunities to progress through the ranks, move eventually to supervisor positions, have leadership roles and branch out.”
As Solar Atmospheres and its market segment continue to expand, Sams says, he takes even more pride in what he does. “We get work from Boeing, which is exciting. It’s interesting to know that some of the parts we process end up in different aircraft and things like that. And people rely on those as they’re traveling across the country.”
TOPICS: Business Recruitment, Aerospace, Materials, Quality of Life, Workforce Development, Technical College System, #TeamUpstate, Existing Industry, Global Competitiveness, International