Opportunity Zones in the Upstate

Real estate and business investors can now take advantage of a federal tax tool intended to encourage American reinvestment in communities across the United States.

Within South Carolina’s Upstate, 25 Census Tracts are designated as “Opportunity Zones” ripe for investment by holders of longterm, patient capital. Click here to interact with an Upstate zone map, or read on for more on how they’re being used.

From urbanized city cores adjacent to growing arts and sports amenities to industrial property with interstate frontage, the Upstate region offers a variety of opportunities for investors to benefit from the Opportunity Zone program. 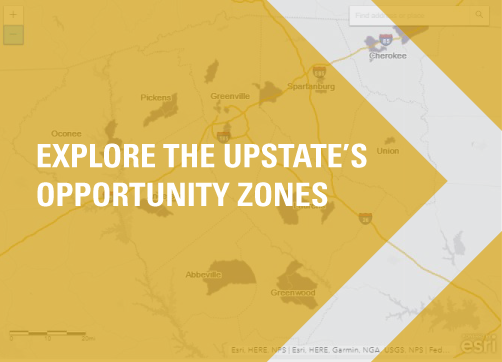 The zones are development tools with robust benefits: investors reap financial benefits for putting their money into community revitalization and improvement in underutilized areas.

One of the champions of the tool was U.S. Senator Tim Scott, who grew up in impoverished areas of North Charleston now represents South Carolina. Scott’s childhood experience fueled development of the bipartisan Investing in Opportunity Act in partnership with New Jersey Senator Cory Booker.

The IOAA’s incentives and Opportunity Zone designations, Scott says, could unlock “trillions” of tax dollars for communities that have not seen the same post-recession economic growth as larger metropolitan areas.

He anticipates these tax advantages will spur “public-private partnerships that encourage long-term growth and continued success” in communities much like those where he spent his childhood. 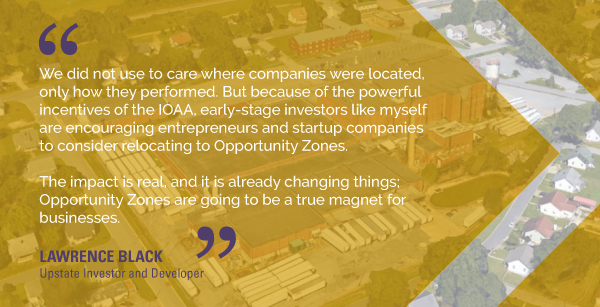 Greer Mill, an 8.5-acre, 285,000 square-foot former textile mill is one example of the type of revitalization the Opportunity Zones encourage.

Property owner Lawrence Black, an Upstate investor and developer, is about four months into bringing the mill back to life as a mixed-use development. Black also owns Southern Bleachery at Taylors Mill, another Upstate textile mill that’s been given new, mixed-used life.

The mill, about five blocks from downtown Greer’s Trade Street, has undergone voluntary cleanup through the South Carolina Department of Health and Environmental Control, and plans are underway to reimagine it as a residential, commercial and retail hub.

“Being a mill and not doing the work from the ground up, you have to work with the space you’re given,” Black says. “Though compared to most textile miles, it’s in pretty amazing shape.”

The redevelopment comes with both long and short-term benefits: longterm, the project brings synergy and housing options into a growing downtown, in an area adjacent to many popular parks.

In the short term, it also creates jobs for the demolition crews, architects, construction companies and other companies plugged into the rebuilding process.

And that’s the spirit of the zones.

“There is a tendency for certain areas to see more investment and economic growth than others,” Black explains. The power of Opportunity Zones is that “the label itself provides underserved communities a second look from investors,” and the benefits to investors help to ease financing while taking some risk out of those “leaps of faith.”

“This is the kind of project the IOAA was meant for within the kind of community it was meant for,” he adds. “Public-private partnerships like this will spark further development, inspire additional investment and bring more attention to opportunity zones.”

“The first is an industrial zone that includes BMW, GSP International Airport, and all or portions of five industrial parks,” Deaton says. “The second zone includes our historic downtown and the Greer Mill, which is being transformed into a mixed-use project including retail, office and multi-family residential space.”

Having two markedly different areas available for the IOAA’s tax advantages provides the city “something for any investor,” says Black, regardless of what kind of site they require. “With our downtown, leadership and access to the Inland Port, we have distinct advantages, but have never quite met Greer’s full potential. The designation of Opportunity Zones in our area could make that difference; we are going to attract more attention and have even more to offer investors.” 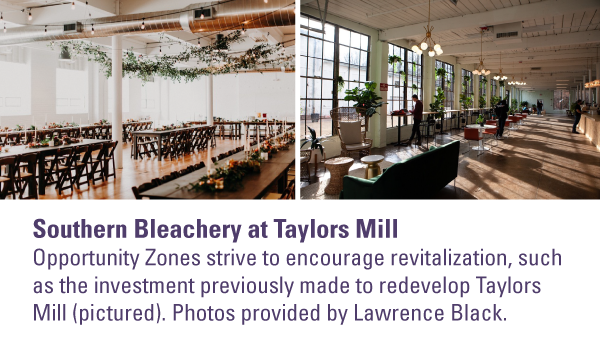 A True Magnet for Business

Opportunity Zones at work, he adds, are a prime example of the public and private sectors coming together for a common good.

Developers are already feeling the momentum Opportunity Zones have sparked across the Upstate.

“As word gets out,” Black says, “I think investors will begin looking exclusively to Opportunity Zones. We did not use to care where companies were located, only how they performed. But because of the powerful incentives of the IOAA, early-stage investors like myself are encouraging entrepreneurs and startup companies to consider relocating to Opportunity Zones. In some cases, investors may even make location in an Opportunity Zone a requirement to receiving investment.

“The impact is real, and it is already changing things; Opportunity Zones are going to be a true magnet for businesses.”