Who’s Moving to the Upstate?

Floridians, Texans, and internationals among those Moving Up in the Upstate

South Carolina’s Upstate is growing by leaps and bounds – from businesses investing in the region, to passengers and cargo moving through Greenville-Spartanburg International Airport, to new homes coming to the market and new residents hoping to find a job or lower cost of living.

As we uncovered in the process of researching for the Move Up talent initiative, an average of 30 people move to the Upstate each day. We may be biased, but we think it’s because the Upstate is one of the best places to live in South Carolina.

Where are they coming from, and what does it mean for our economy?

The Upstate SC Alliance Research Team has explored the numbers, and they’re pleased to share their findings: 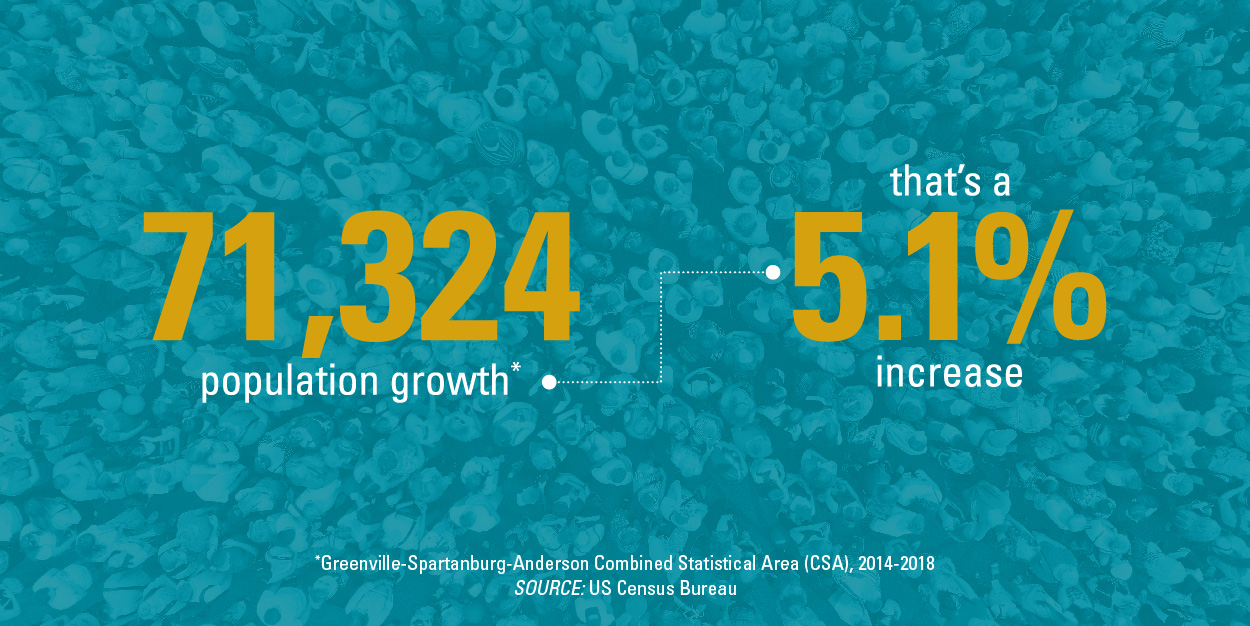 1. The Greenville-Spartanburg-Anderson Combined Statistical Area (CSA) has seen a population growth of 71,324, a 5.1% increase from 2014 to 2018, according to the US Census Bureau.

The influx of internationals parallels the increased Foreign Direct Investment in the Upstate over the last five years: more than $6.5 billion dollars of capital investment and almost 12,400 jobs created. The Upstate is now home to 508 foreign companies from 38 different countries.

Within the Upstate, two Metropolitan Areas saw greater growth than the overall Upstate growth from 2014-2018: 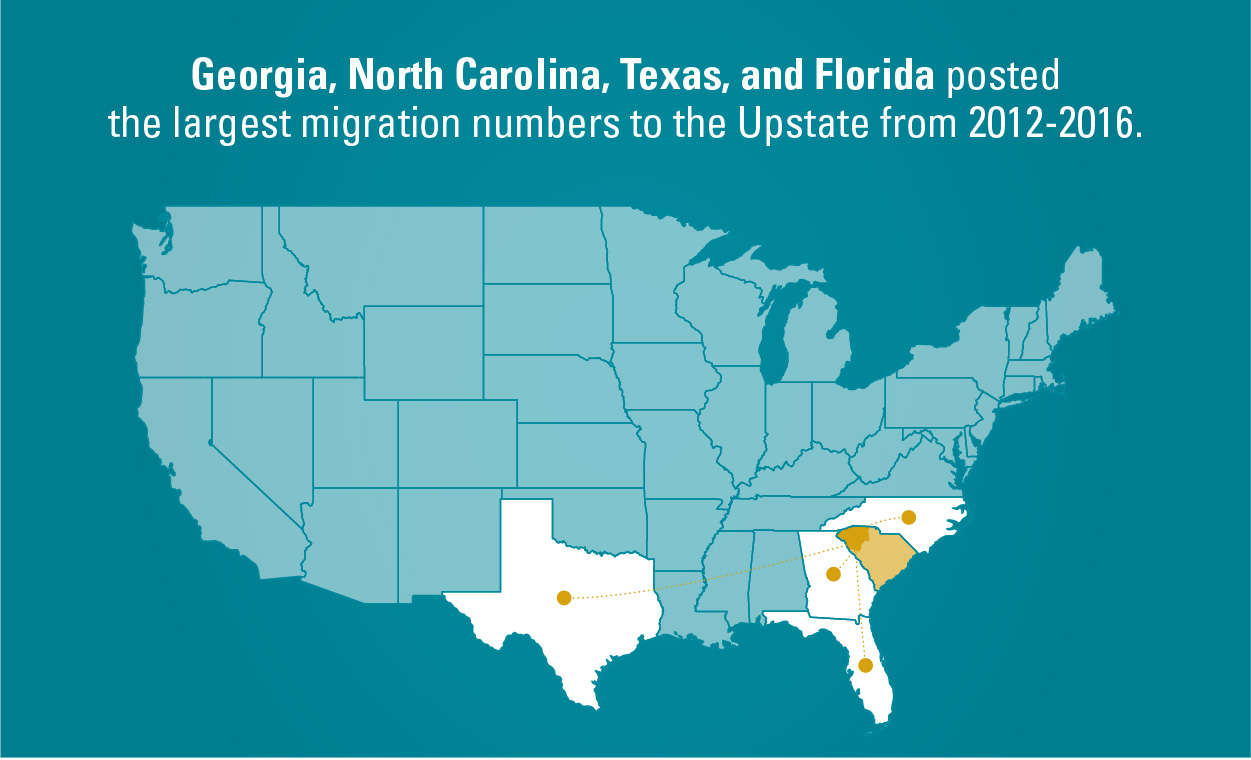 2. Most of the migration comes from within South Carolina and Southeastern States

Georgia, North Carolina, Texas, and Florida posted the largest migration numbers to the Upstate from 2012-2016.

Our immediate neighboring states of Georgia and North Carolina are not surprises. In fact, as Atlanta and Charlotte have both grown in recent years, the Upstate has benefited, as we are strategically located between these two markets.

Texas and Florida are states known for a high volume of talent or strong educational resources in the Upstate’s in-demand industries, such as Financial Services, Information/Communications Technology, and Life Sciences/Healthcare.

Within South Carolina, the greatest volume of migration to the Upstate comes from Columbia, Charleston, Myrtle Beach, and the Rock Hill/Fort Mill area just South of Charlotte. 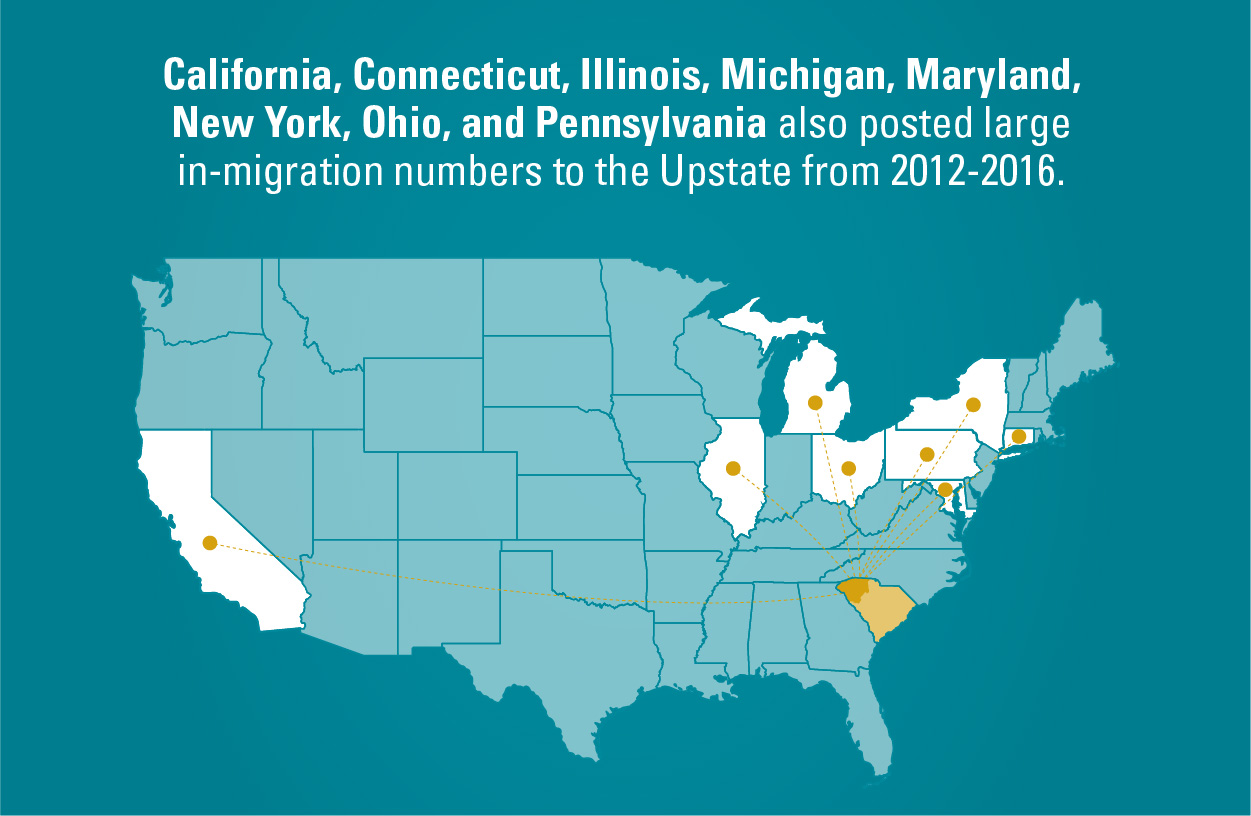 3. Migrating from More than Southeastern States

While most of these states are more densely populated than South Carolina, it is noteworthy that the Upstate’s cost of living is lower. In some cases, such as Manhattan in New York City, cost of living in the Upstate is as much as 88% lower.

It’s true that cost of living can be a strong driver in relocation decisions, though we’ve also seen in-migration from many areas with comparable cost of living. That’s an indication that availability of strong career opportunities is a strong draw, especially when combined with the region’s small-town spirit and big-city vibes.

The Upstate announced $1.2 billion of capital investment and over 4,200 jobs created in 2018, and it has a growing entrepreneurial and office atmosphere. These elements – combined with in-migration – contribute to future growth. Esri projects the Upstate will see an annual population increase of 1.05% through 2024.

With that on the horizon, we anticipate many more people seize the opportunity to Move Up in the Upstate.

Check out our data center to learn more about population growth and demographics in the Upstate.

Interested in more on immigration and moving to the Upstate? See other posts in our series: