May 24, 2017
The 13th annual Artisphere festival filled downtown Greenville’s streets with color, art and attendees galore in mid-May, attracting more new artists than ever before. While 2017 totals are still being tallied, last year’s Artisphere had an economic impact of $6.4 million and 100,000 visitors, according to the Greenville News. If the crowds were any indication, this year’s festival was every bit as successful.

The popular festival draws more than art lovers and ardent cultural benefactors. Increasingly, Upstate companies have begun to see and strengthen the ties between business and culture. TD Bank, whose corporate campus is just miles from the festival venue, was the presenting sponsor of Artisphere 2017.
“TD Bank is passionate about the arts, which is evident through our longstanding commitment to Artisphere and other arts initiatives in the Upstate,” says Cal Hurst, Regional Vice President, TD Bank. “We are proud to play a role in shaping the arts community for residents and visitors to the Upstate and look forward to advancing the vibrant arts culture for years to come.”
With notable corporate supporters behind it, the economic boost Greenville sees from Artisphere and festivals like it is substantial. The value of the arts in the Upstate extends beyond the esoteric — how can you put a price on quality of life, especially as companies compete for talented workforce? — and into the kind you can put on paper: dollars and cents.
According to Greenville’s Metropolitan Arts Council (MAC), the economic impact of its Peace Center alone is approximately $26 million. From direct employment to patronage of nearby restaurants and hotels to foot traffic at downtown shops, the impact of a single arts venue is far-reaching. What, then, is the overall effect of the arts economy on the area as a whole?
“The annual economic impact of the arts in Greenville County is estimated to be well above $200 million,” says Alan Ethridge, MAC’s executive director. “For a city our size, we offer an outstanding array of cultural amenities; many significantly larger cities do not have the arts assets we do. Over the last decade we have seen the birth and growth of Artisphere, the Children’s Museum of the Upstate, the Upcountry History Museum, the Greenville Center for Creative Arts and the Younts Center for Performing Arts in Fountain Inn, to name just a few.
Researchers at the Darla Moore School of Business at the University of South Carolina analyzed 2008 census data, determining that creative enterprise in the state engenders a core impact of $9.2 billion and 78,682 jobs and a full impact of $13.3 billion and 107,614 jobs, according to the S.C. Arts Commission. The totals are impressive, and the Upstate intends to nurture their growth.
While measuring economic impact is valuable, the arts add even more to the Upstate economy than a spreadsheet might reveal, Ethridge says. “It is important to arts funders that economic impact is gauged and reported, but there are so many intrinsic, immeasurable benefits to a strong and unified arts community. The arts are also a major factor in tourism, urban revitalization and in the decision-making process of both individuals and corporations looking to relocate.”
Greenville isn’t the only corner of the Upstate that has capitalized on the arts’ impact on its economy.
In Greenwood, conversion of a Georgian style building constructed in 1911 into the Arts Center of Greenwood was the cornerstone in a downtown revitalization, initiated in recognition that leisure amenities and a thriving downtown would help the county’s many industries to retain talent. 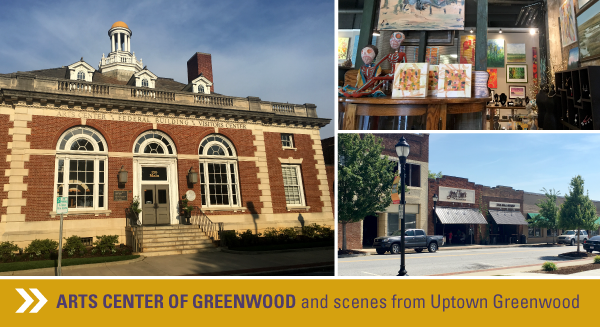 In 2002, the federal government decided to vacate the building in the heart of Uptown Greenwood, paving way for the city and county to jointly own and renovate the building. Today, it serves as a Visitors Center, used for special events, arts and music shows and office space for the Arts Council of Greenwood County, the Self Family Foundation and the Greenwood Regional Tourism and Visitors Bureau.

Earlier this month the S.C. Arts Commission, CommunityWorks and the Chapman Cultural Center unveiled a statewide initiative to increase arts-based entrepreneurship and expand creative businesses. The new ArtsGrow SC program includes micro-loans, business venture loans, grants, personalized workshops and a 3:1 savings match program for “creative-preneurs,” says Rachel Williams, director of marketing for the Chapman Cultural Center.
ArtsGrow SC builds on an already thriving arts economy in Spartanburg, including its designation as the state’s second certified “cultural district” for its concentration of live performance venues, galleries, public art, museums, studios, historic sites, greenspaces and festivals. The designation includes four square blocks within the city’s limits, bordered to the north by the Spartanburg Memorial Auditorium. In addition, the distinction, approved by the City of Spartanburg and the S.C. Arts Commission, recognizes the hundreds of arts-based jobs and businesses within the area.
To support these businesses and attract more, Williams says, “Spartanburg uses the cultural district make known that ours is an arts town. This ensures the businesses in our cultural district are thriving, increasing foot traffic and underscoring the idea that our business and cultural districts overlap.”
So it is for the Spartanburg’s economy: in most every way, business and the arts overlap. Providing a city rich in the arts and teeming with opportunity allows the college town – home to seven institutions of higher learning – to retain its brightest talent, which in turn provides an educated workforce for businesses in the region.
With the continued growth of the arts economy, the increasing quality of life in the region’s art-filled cities and a groundswell of community support, the Upstate of South Carolina will continue to overlap business and art, making something beautiful in the meantime.