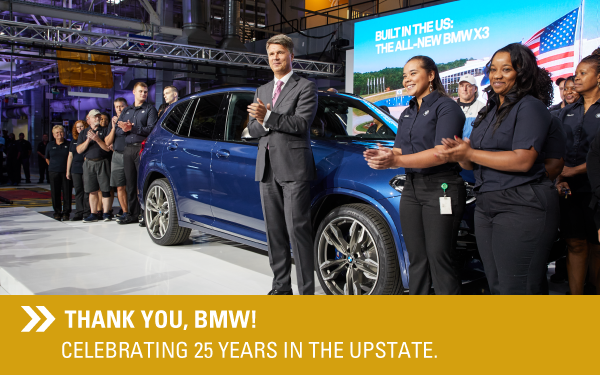 Just over 25 years ago, an announcement was made that would forever transform the business landscape of our region and state: plans for Germany luxury vehicle maker BMW to build a manufacturing facility in Spartanburg County.

Since breaking ground, the company has zoomed beyond expectations. The initial announcement cited $600 million investment and creation of 2,000 jobs. Today, cumulative investment estimates hover around $8 billion, and the Greer production facility employs nearly 9,000.
During a celebration this week of the company’s 1992 announcement anniversary, leaders announced an additional $600 million investment and creation of 1,000 more jobs by 2021, deepening their commitment to American, and Upstate, operations.
BMW’s decision to locate within the Upstate provided an economic renaissance to our region – the company’s presence here has attracted a myriad of automotive suppliers, informed our workforce training programs, and catalyzed Clemson University’s International Center for Automotive Research.
In fact, explaining the value of BMW to our community is a multifaceted, meandering conversation that touches most every sector of the economy and has been explored in recent weeks by many media organizations:

Curious About the Deal? 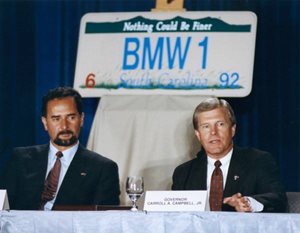 In this 2014 retrospective, the Spartanburg Herald Journal explored the years-long recruitment process, including a round-the-clock period of time assembling a land portfolio that spanned “a dairy farm, homes, barns, a beauty parlor, a comic book store, a factory that made tungsten products, a warehouse for silk flowers, a peach farm and a grass seed production facility.”
“BMW not only elevated salaries and wages, but it elevated the world’s impression of Spartanburg,” recalls Spartanburg businessman George Dean Johnson and Johnson Development Corp. President Foster Chapman in the piece.

In addition to BMW’s nearly 9,000 employees, the Darla Moore School of Business at the University of South Carolina indicates that the BMW multiplier effect is among the highest in the state.
What does that mean?
“The study indicated that in addition to the 7,654 jobs which BMW provided in 2010, its 40 Upstate suppliers employed an additional 13,444 jobs, and the number of induced jobs (economic activity triggered by the suppliers) had created an additional 9,679 jobs, for a total of 30,777,” says a recent Anderson Independent Mail piece.
Within the Upstate, our research indicates 223 automotive-related companies have operations within the region; of those companies, 36 have 251 or more employees and 66 have 101 or more employees.
ZF, Draexlmaier, Magna, Sage Automotive Interiors, Gestamp, EuWe Eugen Wexler US Plastics, Inc., and Röechling Automotive – each named in the piece – are a small sample of the company’s many Upstate suppliers.

During its announcement on Monday, BMW Manufacturing President and CEO Knudt Flor recognized the dedicated workers who’ve contributed to the company’s success.
“You’re at the heart of BMW,” Flor said to a group of employees who joined the stage. From a 22-year company veteran who started on a production line to a BMW Technical Scholar graduate whose first day in her new role coincided with the announcement, the Spartanburg Herald Journal captures employee perspectives in this piece.
BMW also announced $200 million investment over five years for training and education of its existing workforce.
Beyond its $600 million investment, which will enhance production of future X model vehicles, the company also announced a $200 million, five-year training initiative.
BMW AG Chairman Harald Krüger said the training program will be rolled out nationwide, in partnership with local universities and colleges that offers a combination of job training and degree earning, according to the Greenville News.
“We will keep investing in our people, in our business in the United States,” he said. “This underscores our enduring commitment to the people of this great nation and great state.”
To BMW for believing in the Upstate, and to the many men and women whose work has demonstrated our region’s talents, we give our thanks.