Counting Big Buffalo in the Upstate 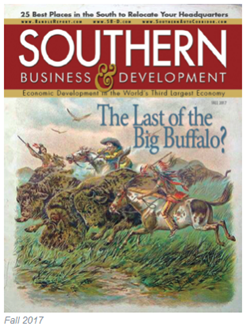 Last week, speculation about a $1.6 billion Toyota-Mazda automotive project with 4,000 jobs was brought to an end with the announcement that the project is headed for Huntsville, Alabama.
The project is the driver in the cover story for Southern Business & Development’s (SB&D) current issue, in which publisher Michael Randle questions whether the project, and Amazon’s HQ2, are among what he calls the “last big buffalo” projects—the ones with great enough jobs and capital investment numbers to have a profoundly transformative effect on their chosen communities.
Randle’s exploration echoes many of the data points that our Research Team has been tracking, too: the idea that smaller, more cautious approaches are on the rise among businesses, especially as the labor market has tightened across the country.
Many public officials still hope for large investment and job creation numbers to sweep their communities, but our Business Recruitment Team is increasingly hearing from small businesses looking to mitigate risk.
Even ask the market shifts, however, counting these “big buffaloes” remains a point of pride for us.
In addition to exploring on market shifts, the publication offers the “Big Buffalo Manufacturing Sector Awards,” a reflection on 25 announcements in the last 25 years that had a significant transformative effect on their communities.
The “Big Buffalo Manufacturing Sector Awards” includes five Palmetto State projects, and two from the Upstate:

“Simply put, automotive plants are the Big Kahuna in economic development. No projects have the economic effect that an automotive plant has on a state, multi-county region or city,” Randle writes.
Our region can attest to that. And we often hear about the impacts of BMW, which last year announced an additional $600 million investment and plans to create 1,000 more jobs by 2021.
In all of the excitement over an OEM, we can sometimes lose sight of the benefits an automotive supplier can reap. The list’s inclusion of ZF Transmissions in Gray Court is a great reminder.
The producer of eight- and nine-speed automotive transmissions for passenger cars has invested more than $600 million at the facility in Gray Court, with approximately 2,600 employees and $138 million in 2016 payroll, according to the publication.
SB&D asserts that we should value and foster the “big buffaloes” in our midst, while also embracing the smaller gazelles looking for homes.
That’s a balanced growth proposition, and the Upstate is already welcoming smaller projects often called “Landing Pads” or “Soft Landings.”
AWL-Techniek in Spartanburg, SMT Group at CU-ICAR, and the Oconee Economic Alliance’s recently announced vermon NDT at the Oconee Business Center in Walhalla are all examples of the “future” of economic development.
While many talk about the “future” as if it’s long off, we know the future is now.
TOPICS: Business Recruitment, Rankings & Recognitions, Existing Industry