Immediate Past Chairman Reflects on #TeamUpstate

May 16, 2018
With the BMW Charity Pro-Am presented by SYNNEX CORPORATION welcoming celebrity golfers, spectators, and business visitors to the Upstate for its annual celebrity golf tournament this week, we’re reflecting on BMW’s take on the #TeamUpstate concept with this message from Max Metcalf. It was originally featured in the Upstate SC Alliance 2017 Annual Report, published in March 2018:

“I feel deeply honored to have served as Chairman of the Upstate SC Alliance [from March 2016-March 2018].

We have an incredible staff, and we’re strengthened by an incredible group of investors from the public and private sectors who are willing to give their time to attend events, participate in committee meetings, and be involved in the marketing of Upstate South Carolina to recruit quality, innovative, and high-tech jobs to the area.
The Alliance’s updated five-year strategic plan, released in March 2017, and the Global Competitiveness Council, launched in July 2017, are among the hallmarks of a year shaped by collaboration. The Upstate SC Alliance allows 170 investors, 10 counties, eight cities and countless supporters to partner with the State of South Carolina in an unbelievable effort to push its initiatives forward. In fact, the level of collaboration we’ve seen recently lays the foundation for what we like to call ‘Team Upstate.’
We recognize that there are some challenges ahead that may appear to be paradigm shifts away from major projects — such as the rise of automation and smaller projects on the horizon — but with the team of Local Economic Developers, government officials, and private sector investors that make up ‘Team Upstate,’ we’re going to be successful. 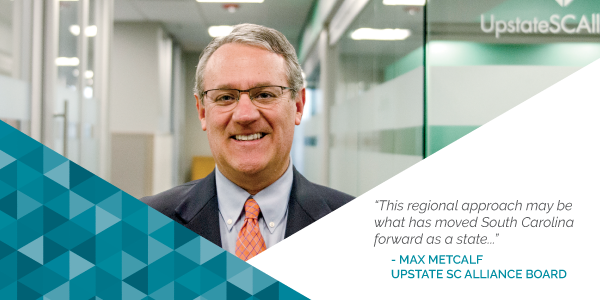 Historically, individual communities did their own economic development. In recent years, we’ve seen a greater shift toward regional collaboration that allows us to project greater labor sheds; showcase robust regional infrastructure with assets like Greenville-Spartanburg International Airport and the Inland Port Greer; and leverage the assets of research institutions like Clemson University on a broader scale. Apprenticeship programs from Upstate companies such as Michelin, Bosch, Magna and BMW are great examples of the collaboration between the educational and manufacturing sector that can lead to employment opportunities for the next generation of workers.

This regional approach may be what has moved South Carolina forward as a state; we’re seeing that what happens in one community really does benefit its neighbors.
While the team approach is nothing new, it is propelling us faster than other states. It’s even in practice at BMW. We have 10,000 team members at the plant and another 30,000 people employed with suppliers whose products are integral to our success. BMW is producing 1,400 vehicles a day, and everybody has to be an active member of the team to achieve that goal.
That’s also the atmosphere that our region is building with the help of the Upstate SC Alliance. When you look at our region—the 10 counties, the eight cities, and approximately 170 investors—everybody is a team member. It’s a win-win times 1,000.”

Max Metcalf is the Manager of Government & Community Relations for BMW Manufacturing Co. and serves as Immediate Past Chairman on the Upstate SC Alliance Executive Committee.