Union County, a community of 28,000, has seen $350 million in capital investment and creation of 1,000 new jobs in the last decade—numbers the rural community may not have achieved without a regional business proposition, says Kathy Jo Lancaster, Executive Director of the Union County Development Board.
“The purpose of our organization is to recruit new businesses, retain existing industries, create new jobs, and procure capital investment in Union County,” says Lancaster, who assumed her role in 2016. She says partners such as the Upstate SC Alliance play a pivotal role in bringing that mission to life.
“As rural developers, it makes a real difference to tap into the resources, networking, and opportunities the Alliance provides,” Lancaster explains. “The biggest advantage to being involved is the strong framework of investors who share resources, collaborate, and connect to promote our region more effectively.”
Lancaster says the Upstate SC Alliance helps connect Union County with opportunities her team “wouldn’t be able to capture on our own. They pull developers together, arrange meetings with site selectors, and make us more visible and viable in a global economy. Investing puts our name out there.” 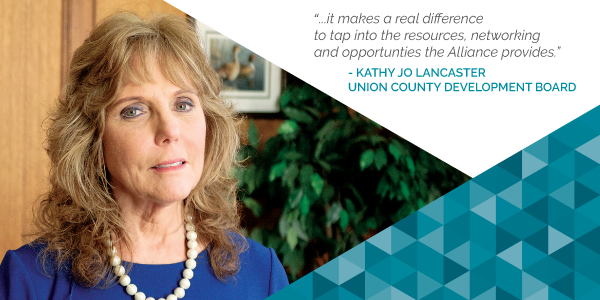 Economic development in a rural community, Lancaster notes, has distinctive challenges the Alliance helps her overcome. “There’s power in regionalism. This partnership brings our small community connectivity, collaboration, and accessibility. Participating in the Upstate SC Alliance is key to positioning ourselves for success.”
Lancaster believes investing in the Upstate SC Alliance brings Union County “resources for workforce, transportation, utilities, healthcare, and quality of life – all viable components in a regional economic development plan. We need those elements to be successful, and through the Alliance we now have them.”
In a global economy, Union has to “think outside of county lines to succeed,” Lancaster says. “Union County is a rural community, but we have had a very real impact on our local, regional, and state economies in the last 10 years.”
Products made in Union can be found throughout the globe – take for example Standard Textile terry cloth products, carried at Marriott properties worldwide, or Carlisle Finishing camouflage, which outfits American armed forces at home and abroad.
And Gestamp, an international manufacturer of metal automotive components, announced $129 million in new capital investment in March 2017 that will enable the company to serve both BMW and the Volvo Cars production facility in Berkeley County.
Ask Lancaster about a favorite project she’s worked with the Alliance, and it’s hard for her to identify only one.
“Every single project in Union County has had Upstate Alliance involvement since I came on board. If the team was not sitting at the table with us, they were behind the scenes helping,” she says. “They have the connections to win projects and strengthen our economy; the resources are there.”
TOPICS: #TeamUpstate, Existing Industry, Global Competitiveness, International, Business Recruitment, Automotive