Mr. Carter Smith, CEcD, executive vice president at Economic Futures Group, Spartanburg Chamber of Commerce was chosen by his peers as this year’s “Upstate Economic Developer of the Year.” The award was announced at the Upstate SC Alliance’s Mid-Year meeting Wednesday at the Crowne Plaza in Greenville. The award recognizes the hard work and dedication of local developers in the Upstate who have made a significant difference in their community. 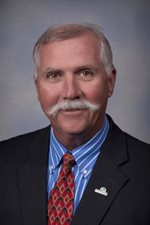 “He has played a leading role in building the Upstate’s global competitiveness. This region is very fortunate to have benefitted from his wisdom, guidance and professionalism for the past 23 years.”

Carter was not present to accept the award because he was hard at work representing his county working on another project. When informed of the honor he said, “I’m honored and humbled to be recognized by my peers this way. I’m just one member of a great team that gets these deals done.”

Smith has worked on some of the largest and most celebrated economic development projects in South Carolina history including BMW, Adidas and Toray. Asked what has made Spartanburg so successful at winning projects, he replied, “Teamwork. We have had strong, focused, consistent leadership from the public and private sectors. There has always been a high priority placed on supporting the needs of business—existing and new, large and small.”

About the Upstate SC Alliance

The Upstate SC Alliance is a public/private regional economic development organization designed to market and brand the Upstate of South Carolina. The Upstate represent the commerce-rich northwestern corner of South Carolina, including the I-85 corridor and the Greenville-Spartanburg-Anderson metropolitan area. Additional information is available through the Alliance’s web site, www.upstateSCalliance.com.

TOPICS: Celebrations, Rankings & Recognitions, News You Can Use